The Owl (real name: Leland Owlsley) is a fictional character, a comic book supervillain who frequently menaces Daredevil and other heroes - notably Spider-Man and the Black Cat - in the Marvel Comics Universe. was once a successful financier and financial investor, nicknamed "The Owl of Wall Street" for his financial wisdom, until his criminal connections were exposed by the IRS. After this event he abandoned his profession and became a professional criminal and eventually a formidable crime lord in his own right. He is most often an enemy of Daredevil, as mentioned above, but has also come into conflict with Spider-Man, the Black Widow and the Fantastic Four.

Owl in Spider-Man: The Animated Series 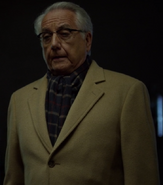 Retrieved from "https://villains.fandom.com/wiki/Owl?oldid=3316589"
Community content is available under CC-BY-SA unless otherwise noted.