Destroy all realities to make "the only choice that truly matters"

Owlman is the main antagonist of the direct-to-DVD animated feature, Justice League: Crisis on Two Earths. He is a founding member of the Crime Syndicate and Batman's Earth-3 counterpart who plots to destroy the multiverse upon discovering it.

He is voiced by James Woods, who also voiced Hades in Hercules, Falcon in Stuart Little, Dr. Phillium Benedict from Recess: School's Out, Lester Diamond in the film Casino, and even a fictional version of himself in Family Guy.

Owlman is a member of the Crime Syndicate on a parallel Earth, and he is romantically involved with Superwoman. His backstory isn't made clear, other than he described himself as never having been good due to "being human." He first appeared, along with the Crime Syndicate, before Lex Luthor after he tried to escape after his partner, the Jester, sacrificed himself. After he saw Luthor escaped to another dimension by using a traveling device, he learns about the Multiverse and, due to his misanthropy and nihilism, seeks to destroy the Multiverse by destroying Earth Prime, in order to make "the only choice that really matters", believing that the other choices that humans make are just meaningless illusions and that lead to "the source of the cataclysm".

He and Superwoman later raided his world's Justice League's headquarters, along with several Made Men (villains they gave power to). Just then, Lex Luthor and the Justice League appeared before them. The Justice League broke into battle with the Made Men, then escaped the headquarters, which it turned out to be a flying aircraft. Owlman chased after the heroes on his jet as the Shazam family arrived. As Wonder Woman landed on top of his plane, Owlman stepped out, firing a gun at her. Owlman managed to safely fly away after Wonder Woman threw him off his plane.

Owlman was later seen having a meeting with the Crime Syndicate. He discussed his plans about the QED bomb. His cohorts believed it was a plan of threat, so they agreed. Little did they know about his true plan to destroy all worlds. With the help from the other members of the Syndicate, he is able to construct the Quantum Eigenstate Device (QED). While they were constructing the device, Owlman, along with Superwoman, secretly search for Earth Prime.

He was later seen waiting for Superwoman, along with the rest of the Crime Syndicate. Ultraman became inpatient and was determined to finish the bomb. Just then, one of Superwoman's men returned from helping her find the Quantum trigger in the alternate world and gave Owlman the Quantum trigger: the QED's essential piece.

As the Justice League arrives at the Crime Syndicate's moon base, they broke into battle with their dimensional selves as Luthor tried to stop the QED bomb, but failed.

Owlman is eventually able to find Earth Prime after taking out Batman, so he teleports both himself and the QED there. With help from Johnny Quick, Batman teleports to Earth Prime to confront Owlman. The two fight, during which Owlman questions why Batman decides to protect humanity despite the two of them being very similar to one another. Batman replies that, while they are both similar, there is one difference: Specifically, when the abyss gazed back at them when they looked into it, only Owlman "blinked" in response. In the end, Batman teleports both the QED and Owlman to a frozen, uninhabitable Earth before the QED detonates. Owlman has the option to abort the explosion, but instead, he calmly states "It doesn't matter." As the QED detonates, both Owlman and the frozen Earth are wiped out.

Owlman proves throughout the movie that he is a selfish monster who would do anything to live in a world that he wants. Unlike most of his fellow members, he is even willing to destroy a universe to get what he wants. This makes nothing more than an insane monster as he didn't even care when Batman foiled him and left him to die. 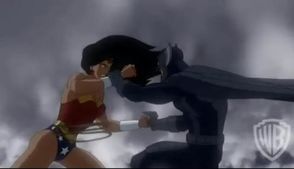 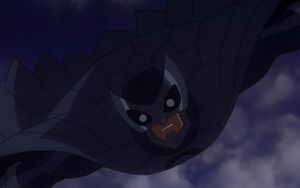 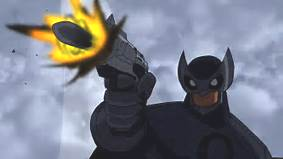 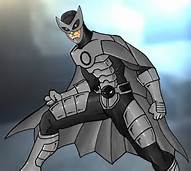 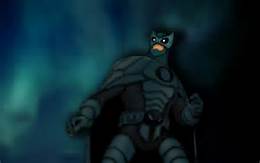 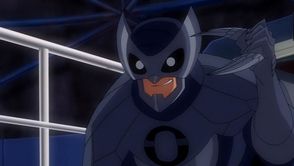 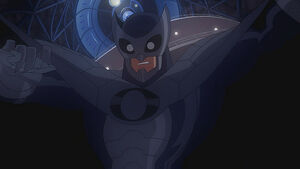 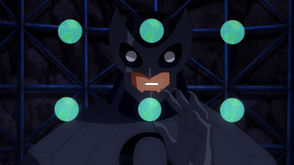 Owlman explaining his plan to destroy all earths in the multiverse 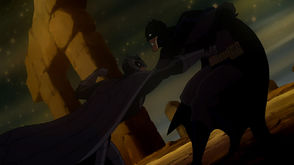 Owlman's death.
Add a photo to this gallery