Member of the New Enforcers

No information
Raymond Bloch, also known by the codename of Ox, is one of the supporting antagonists (alongside Rhino, Vulture, Chameleon, Sandman, Electro, Mysterio, Tinkerer, Shocker, Ricochet and Molten Man) of the animated TV series The Spectacular Spider-Man. He was one of Spider-Man’s opponents serving as a member the New Enforcers.

He was voiced by Clancy Brown in the first season who also played Rhino in the same series, Byron Hadley in The Shawshank Redemption, The Kurgan in Highlander, Surtur in Thor: Ragnarok, Taskmaster in the 2010 Marvel Animated Universe, Lex Luthor in many DC Comics animation projects, the Dark Dragon in American Dragon: Jake Long, Savage Opress in Star Wars: The Clone Wars and Mr. Krabs in Spongebob Sqaurepants and was voiced by Danny Trejo in the second season.

In Season 1, Ox first appears with Montana and Fancy Dan where they are hired by Hammerhead and Tombstone AKA the "Big Man of Crime" to hunt and destroy Spider-Man. During his fight with the Vulture, the Enforcers ambush him and fight with him. Spider-Man manages to defeat Fancy Dan and Ox but Montana continues chasing him. Spider-Man manages to damage the Vulture's wing on the helicopter which forces Montana to land and flee while the other villains are taken to prison. Montana becomes the Shocker but is defeated by Spider-Man and taken to prison.

Later, the Sinister Six and the Enforcers organize a prison break and are given their suits and equipment back from Hammerhead who takes Fancy Dan and Ox with him and tells Montana to stick with the other five villains for now before they make their escape. The Six are defeated by a symbiote-controlled Spider-Man.

In Season 2, Fancy Dan (who becomes Ricochet) and Ox are equipped with their own suits by the Tinkerer and Tombstone and the Enforcers proceed to go rob the Metro bank. There they fight with Spider-Man and manage to defeat him before escaping. They return by sneaking their way back in and proceed to steal the gold bars until Spider-Man battles them through the subway into the street. They are defeated before they can escape. Later when the Green Goblin takes control of the Vault, he releases many of its prisoners including Fancy Dan to destroy Spider-Man. However, Spider-Man along with Black Cat and Walter Hardy are able to defeat the prisoners who are taken back to their cells. 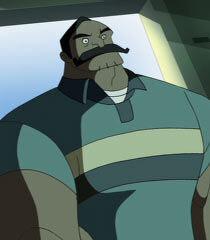 Ox without his suit. 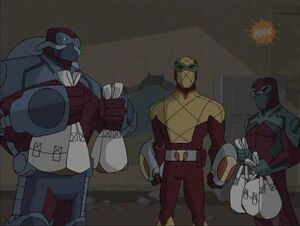 Ox and the New Enforcers.