Ruling The Fire Nation, abusing his children namely his son

Fire Lord Ozai is the main antagonist of Avatar: The Last Airbender. He is the supreme antagonist of the series due to being in control of the Fire Nation and being the father of Zuko and Azula.

He is voiced by Mark Hamil, who was famous for playing the hero Luke Skywalker, and voicing other villains such as The Joker, Malefor, Colonel Muska, Hobgoblin and Ferris Boyle, Alvin the Treacherous, and Dr. Stankfoot.

When his nephew, Lu Ten, was killed in battle Ozai believed Iroh (in his grief) would not be capable as Firelord. He asked his father, Azulon to relinquish the title of Firelord to him, noting that he would be capable of maintaining the royal bloodline. Outraged by this request, Azulon ordered Ozai to kill his son, Zuko. At first, Ozai was willing to comply with this request. However, his wife Ursa managed to save her son's life by taking his place. However, instead of being killed, she was banished. Azulon mysteriously died at about the same time (it was revealed in the comic The Search that Ursa had actually procured a poison for Ozai, with which he committed patricide on his father), and at his funeral Ozai was crowned Fire Lord, as Iroh was too sad to accept the role as leader of the Fire Nation.

Later in life, when Zuko was thirteen years old, he attended a military meeting, where one of Ozai's generals suggested that they send a group of soldiers to distract the troops of the Earth Kingdom while they had their other soldiers ambush the Earth army and then overcome the capital of the Earth Kingdom, Ba Sing Se. Outraged, Zuko spoke out against this plan, and he was punished severely: being forced into an Agni Kai against his own father. Zuko was unwilling to hurt his father, and as a result, the Fire Lord blasted his son, creating a huge scar on his face. Ozai banished Zuko unless he found the Avatar, master of the four elements.

Ozai's main goal is to conquer all the nations and rule over them under the title of "The Phoenix King". To do this, he attempted to use Sozin's comet to wipe out any remaining forces that opposed him.

Ozai is mentioned several times throughout the show, but rarely appears. He is first mentioned by name in the episode "King of Omashu", by King Bumi. Most of his appearances are in visions that Aang has or in flashbacks of Zuko's past. The first time we see him outside of flashbacks of visions is in the finale of the first season, where he gives his daughter Azula the orders to capture his son and brother, who he blames for the failure in the invasion of the Northern Water Tribe. However, in all of his appearances prior to Season 3, his face is covered by shadows. In the Season 2 episode "Zuko Alone", his eyes aren't shown.

He appears far more in the very last season of the show, where his face is shown for the first time when he welcomes his son Zuko back home after he helped Azula and the Dai Li "kill" the Avatar (he survived thanks to some mystical healing water) and conquer Ba Sing Se. Throughout the first half of the season, Aang's gang and Zuko see many paintings and statues of him. The night before the Avatar and his allies invade the capital of the Fire Nation, where the solar eclipse will stop any firebending, the Fire Lord holds a war meeting with his children and his general. At this meeting, he came up with the plan to use his newly built airships to commit genocide against the people of the Earth Kingdom, leaving only the Fire Nation and the massively divided people of the Water Tribe left on the planet. This was it; he was evil, heartless and must be put down like a sick dog.

During the invasion, Ozai and many other nobles and soldiers hid in a giant metal underground dome near the capital city. Zuko confronted his father during the eclipse, informing him of his choice to join the Avatar, teach him Firebending and free the Fire Nation from Ozai's tyranny. When he is about to leave, Ozai tricks him into staying by telling him the story of his mothers death, revealing she may still be alive. When he finishes the story, the eclipse ends and he shoots lightning at Zuko, who redirects it and escapes.

His next appearance is around three days before Sozin's Comet arrives, which will increase the powers of any firebender to an extreme degree. He appoints Azula as the new Firelord, as he will be known as the Phoenix King, who will rule over all the nations and it's leaders. On the day of the comet's arrival, he boards the largest of the Fire Nations fleet of airships and heads towards the Earth Kingdom. While some of the Avatar's comrades take control of an airship and sabotage the rest of the fleet, Avatar Aang, having learned how to use all four elements, destroys the engine of Ozai's flagship and they begin to duel. For most of the fight, Aang and the Firelord are equally matched, with Aang using his skill in each bending art to block and evade most– if not all– of Ozai's blows.

Eventually, Ozai began to use his lightning-bending abilities, which backfires when Aang reveals his power to redirect it at Ozai. However, unwilling to kill another human being, he willingly misses the Phoenix King, who begins to overpower the Avatar, forcing him to retreat and protect himself in a boulder. After many strong blows, Ozai shatters the rock with a single jet of fire and sends Aang flying. However, this proves to be the Firelord's greatest mistake. As Aang was thrown back by the blast, a piece of rock pierces the scar on his back where Azula killed him, causing him to abruptly reconnect with the energy of the universe. Ozai attempts to finish off Aang only to be confronted with the young airbender returned in the Avatar State (where he has the power and knowledge of all the past Avatars). He proceeds to overpower Ozai in every way, manipulating the four elements in logic-defying ways, finally pining Ozai down. Yet, as Aang prepares to deliver the final blow, he falters- still unwilling to take a lifez- abandoning the Avatar State and releases Ozai.

Ozai calls him a fool and attacks him from behind, but Aang traps him a final time and uses forgotten art called "Energybending" to take away Ozai's bending powers. During the battle, the Avatar's allies, defeated Azula, retook Ba Sing Se and destroyed the Fire Nation's fleet. Completely defeated, powerless and broken, Zuko, as the new Fire Lord, throws Ozai into prison and interrogates him on the whereabouts of his mother.

By the time of The Legend of Korra he has passed away. He may have died of natural causes or may well have been finally executed.

In his prime, Ozai was a master firebender and arguably the most powerful bender of any kind in the world next to the Avatar. Prior to his downfall, it was speculated that the only people in the world capable of defeating him were Avatar Aang and his older brother, Iroh . Ozai's bending style was liberal and ruthless, taking full advantage of the rage-fueled firebending style to produce flame jets and fireballs. However, he was most often seen manipulating the ambient fire in his throne room, making it dance and flare up through force of will alone. Ozai was deeply in touch with his firebending abilities, as seen when he was able to detect when his powers returned immediately following a solar eclipse from deep underground in a bunker.

Under the influence of Sozin's Comet, Ozai's firebending was noticeably enhanced, to the point where he was capable of single-handedly producing waves of fire larger than entire teams of regular comet-enhanced firebenders working together. He could also produce high-heat explosions and condensed jets of flame for close combat with the same destructive power. The blasts of flame he could produce were powerful enough to travel long distances without weakening, shatter stone, and propel him through the air at high speeds for extended periods of time.

Following his defeat at the hands of Avatar Aang, Ozai was stripped of all of his firebending powers, rendering him relatively helpless.

Ozai was one of the few master firebenders of his time able to generate lightning, and was arguably the greatest user of that skill. Prior to the arrival of Sozin's Comet, he was shown making an enormous bolt of lightning with both hands in seconds during the waning seconds of a solar eclipse when most firebending would be impossible. Under Sozin's Comet, his lightning powers were made even more deadly, allowing him to project large, violent strikes of lightning that spread over wide distances. He was, however, untrained in the Lightning Redirection skill developed by his brother, and was vulnerable to other firebenders capable of redirecting his lightning back at him.

Ozai was in good physical condition and demonstrated above-average endurance and stamina, being able to resist gales of wind made by the Avatar which shattered the solid rock around him. He also demonstrated keen reflexes and fast reaction time in his bouts against Aang and Zuko.

In addition to his firebending, Ozai was known as a capable and patriotic leader, beloved by his people for his intelligence, charisma, and courage. Under Ozai's short tenure as Firelord (only five years), the Fire Nation saw the greatest industrial revolution it had known in over one hundred years, which contributed greatly to his legacy. While he had no military career to speak of, Ozai's rule saw the most successful campaigns of the Hundred-Year War, including the decisive victory at Ba Sing Se. Ozai was also a progressive and wise leader, as he recognized ahead of his time that the separation of the four nations was halting progress - unfortunately, his ambition and ego made him decide that the best way to unite the nations would be under Fire Nation rule. Ozai– like his daughter– had a natural disposition towards manipulation, using his cunning to secure his own politcal power. After his bending was removed, this became Ozai's greatest weapon, as he attempted to control his son Zuko from prison– goading his son to follow in his footsteps. 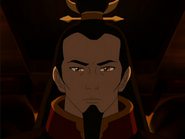 Ozai fire bending
Add a photo to this gallery

Retrieved from "https://villains.fandom.com/wiki/Ozai?oldid=1378001"
Community content is available under CC-BY-SA unless otherwise noted.