NOTE: This article is about The Last Airbender version of Ozai. You may be looking for information on his original counterpart.

Ruler of the Fire Nation

Ruling the Fire Nation.
Killing and torturing anyone that opposes him.
Abusing his children.
Scheming and plotting.
Causing destruction throughout the other nations.

Fire Lord Ozai is the overarching antagonist of the 2010 movie The Last Airbender, based on Book 1 of the cartoon series Avatar: The Last Airbender. He is the ruler of the Fire Nation who desires to conquer the other nations, and the father of Zuko and Azula.

He was portrayed by Cliff Curtis, who also played Uncle Bully in Once Were Warriors and Claudio Perrini in Collateral Damage.

Ozai has a simple crew cut rather than long hair or a beard as he does in the show. However, a family portrait implies that he did have long hair and a beard when he was younger, only to shave it off after he become the Fire Lord. He wears the Fire Nation's armor with red robes underneath. At many points of the movie, he also wears a black and red robe outside.

Strangely, despite being shown from the beginning, Ozai's face is hidden in some scenes of the movie, implying that he was originally supposed to have his face hidden like his show counterpart only for this to be changed late in production.

While Ozai retains a lot of his traits in the show, such as being brutal, cruel and having a low tolerance for failure and opposition, he seems to have a little more compassion for his family, as he refuses to kill Zuko merely because Zhao suspecting the latter to be the Blue Spirit and tells the general to leave his son alone. In addition, while banishing Zuko and Iroh, he still provides them resources so they would complete the quest easier, as opposed to the show's Ozai who orders them to be hunted down. He also admits to be willing in giving Zuko a higher position than Zhao should the boy found the Avatar first.

Ozai seems to have a good friendship with Zhao, constantly talking to him and considering killing the Ocean and Moon Spirits their "shared destiny". The fact that he lists Zhao's death among the losses of the Siege of the North also indicates that he does see Zhao as a valuable asset, while in the show, Ozai doesn't even mention Zhao at all.

The ruler of the Fire Nation, Ozai neglected his son Zuko and eventually challenged the latter in Agni Kai for speaking out to a general in defense of some of his friends that are going to die in battle. Zuko refused to go against his father, thus Ozai burned Zuko and banished him until the latter can find the Avatar, forcing General Iroh to take care of Zuko ever since. Despite this, Ozai still keeps an eye on Zuko's quest, and dismisses Admiral Zhao's accusation of the boy betraying him.

Throughout the movie, Ozai is seen listening to Zhao's reports or talking with the latter about their "shared destiny" about the destruction of the Ocean and Moon Spirits. While Zhao continuously tries to accuse Zuko of being the Blue Spirit just so Zhao himself can get the Fire Lord's favor, Ozai says that Zhao's suspicions are baseless and that he wouldn't punish Zuko for that alone. After Zhao is killed in the Siege of the North, Ozai orders his daughter Azula to find and capture the Avatar as Sozin's Comet is returning.

It's unknown what happened to him afterwards, as all sequels for the movie have been cancelled. 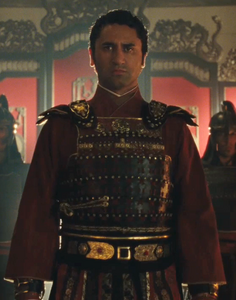