Ozone is the secondary antagonist in Illumination's 6th feature film The Secret Life of Pets.

He was voiced by Steve Coogan, who also played David Ershon in The Other Guys and Blitzen in the Robbie the Reindeer films.

Ozone first appears in an alleyway after Duke threw Max into a garbage bin as revenge of his treatment on him. Ozone appears from the bin and begins antagonizing the dogs and he steals Duke's collar. At first, Duke is not intimidated, but when Ozone's army shows up, Duke cowardly runs away, leaving Max at the mercy of the cats who torment him and steal his collar. When the Animal Control officers show up, Ozone and his group hide and retreat.

Ozone later appears when Tiberius the hawk takes him to Gidget. He coughs up Max's collar, but he sleazily refuses to disclose anymore information, even when Tiberius threatens to throw him off the building he is on. It is not until that Gidget slaps him repeatedly that he tells them that Max and Duke are in the sewers.

He last appears at the ending where he is in attendance at a party of a dog named Leonard, but is forced to retreat along with the other guests when Leonard's owner shows up. 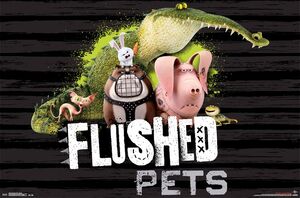 Ozone with the flushed pets.
Add a photo to this gallery

Retrieved from "https://villains.fandom.com/wiki/Ozone?oldid=4369990"
Community content is available under CC-BY-SA unless otherwise noted.