Villains Wiki
Register
Don't have an account?
Sign In
Advertisement
in: Partners in Crime, Animals, Siblings,
and 32 more

The Land Before Time II: The Great Valley Adventure

Get revenge on Littlefoot, Cera, Ducky, Petrie, and Spike (both failed).

Ozzy and Strut are the main antagonists of The Land Before Time II: The Great Valley Adventure. They are a pair of greedy struthiomimus brothers. Ozzy, the older brother, is the leader, and Strut, the younger brother, is the comic-relief follower. Ozzy has a craving for eggs, while Strut was formerly a vegetarian. This is an irritation to Ozzy, as he is constantly seen trying to get Strut to eat eggs. However, the scenario appears to subtly interpret these eggs as a prehistoric form of drugs, making Ozzy seem like an addict.

Ozzy and Strut were amateurish villains who arrived up in the Great Valley in hopes of stealing eggs. However, the more relaxed Strut was ready to eat plants, much to Ozzy's fury. The two characters seem to have a knack for getting into trouble. Ozzy tried to get an egg from a nest of a mother Maiasaura. And yet, the egg was replaced with a rock (thrown by Littlefoot, Cera, Ducky, Petrie, and Spike), and Ozzy, still thinking he had the egg, bit into it. Then, the mother Maiasaura asked the gang to stop rolling rocks down the hill, because her nest was there.

Later, when they unsuccessfully took one of Ducky's unhatched siblings, they were crushed under a mountain of rocks, though surprisingly, it wasn't fatal to them. It was because of their failed attempt at stealing the egg that the five children found Chomper's egg in "The Mysterious Beyond," mistaking it for Ducky's unhatched sibling (which had shockingly rolled back down the mountain and into the family's nest without anyone being the wiser). Ozzy and Strut were vengeful toward Littlefoot and the others, because if it wasn’t for them, Ducky's unhatched little brother or sister would have been their supper. However, during a landslide that happened while Littlefoot, Cera, Ducky, Petrie, and Spike were pursuing them, Strut lost the egg they were stealing, and to cover with Ozzy later on, he fibbed that the five kids were stealing it from them to avoid his brother's wrath. Ozzy thought the egg that contained Chomper was the egg that they attempted to steal, and thus, when Cera told him the egg hatched, he was even more vengeful towards Littlefoot and the gang.

In the middle of the film, they were chased off a cliff when they were about to steal eggs from a mother Pteranodon. While chasing Littlefoot and his friends across a tree-bridge during an eruption by the Smoking Mountain, Ozzy attempted to cross, but the lava set the tree on fire, and he fell. Worried for his brother, Strut jumped off after him.

Near the end of the film, they’re seen for the last time when they’re shown to have survived their fall and ambush Littlefoot, whom they successfully catch and kidnap. To get revenge on him for meddling with their plans, they plan to "get rid of [him] once and for all" by throwing him off the Great Wall of the Great Valley, a plan hatched by Strut, much to Ozzy's shock and delight, as he hadn’t expected him to think of something so evil. However, Chomper, hearing Littlefoot's cries for help, manages to find his friend just as Ozzy and Strut are about to carry out their murderous plan. However, his attempt to rescue Littlefoot fails. Because Strut manages to grab him by the throat and begin strangling him, the new plan being to kill Chomper, as well. Before Strut tries to throw Chomper off the Great Wall, too, Ozzy says to him that he liked him better when he was an egg (meaning that he liked him better before he hatched so he could eat his egg).

However, Chomper's parents fortunately rescued Chomper and unknowingly did the same for Littlefoot. Finally, Ozzy and Strut were chased out of the Great Valley and into the Mysterious Beyond by Chomper's infuriated parents, who had seen that the Struthiomimus brothers were nearly harming their child. Whether or not they were eaten remains unknown, as neither of them have been seen since.

At the outset of the film, Ozzy was clearly the brainier, more merciless of the two brothers. He was the apparent leader of the duo. He kept a sharp focus on their main goal, which was devouring all of the eggs that they could. He was also highly testy, with a temper to match, as he had no problem striking Strut whenever he said something that set him off. However, it can be assumed that, in spite of his aggravation with Strut, he still cared deeply for his brother, since he was trying to "wean" him off vegetation and onto eggs, because he wanted him to grow up and be able to survive the way that they should. As he demonstrated, he was a very vengeful dinosaur who could hold a grudge easily, as well, based on his obsession with exacting revenge on Littlefoot, Cera, Ducky, Petrie, and Spike for stopping them from devouring the egg from Ducky's family's nest. As a matter of fact, his vengeance rose to murderous levels very quickly, as shown by his agreement with Strut's last plan for Littlefoot.

In the meantime, Strut came across as simpler-minded than Ozzy. He was more even-tempered and relaxed, at first, not getting mad all that easily. He also showed himself to be more passive, as he did not have any agency when it came to stealing eggs and had to rely on Ozzy to motivate him into it. He was also attentive, as he tended to recoil from Ozzy's verbal attacks and scoldings and didn’t seem to fight back against any of the physical abuse that he took from his brother. He was so fearful of Ozzy, in fact, that after losing Ducky's family's egg, he actually lied to Ozzy about who had truly cost them said egg to keep himself from getting hurt by him even more. However, as the movie progressed, it was clear that Ozzy's wickedness had started to rub off on him, as his own level of vengeance against the five young heroes eventually began to grow, as well, and he got just as eager to take revenge on them as Ozzy, as shown by him laughing wickedly at them when they cornered them near the tree-bridge. It can even be said that he grew even more sinister than Ozzy, given that he was the one who, upon their kidnapping of Littlefoot, very contentedly and eagerly suggested murdering him by throwing him off the Great Wall, even surprising his own sibling (although pleasantly so) with how evil he had become by that point. He also thought nothing of strangling Chomper when he tried and failed to rescue Littlefoot from him and Ozzy, showing that not even being a child would spare someone from his wrath.

In the end, it can be said that Ozzy was evil from their very first appearance, while Strut slowly, gradually grew into almost as evil of a villain as he was (possibly even more so) by the end. 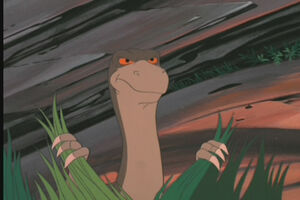 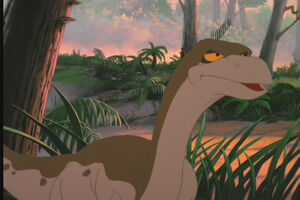 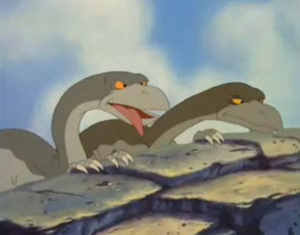 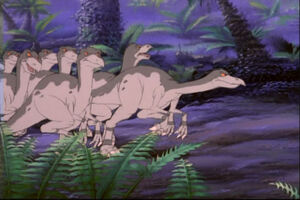 Possible lookalikes of of Ozzy & Strut in Journey Through the Mists. 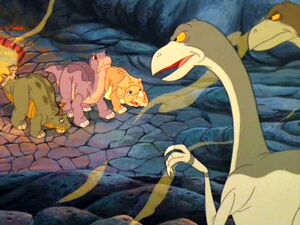 The brothers cornering the gang 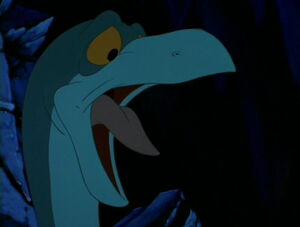 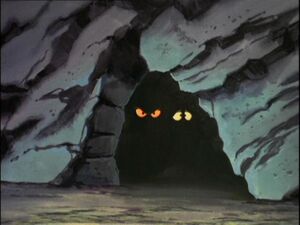 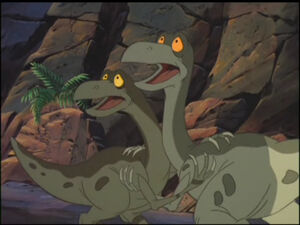 The brothers are spotted by Chomper's shadow 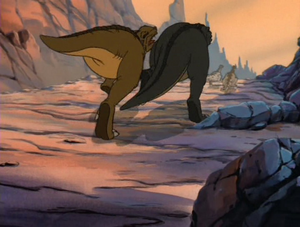