A Computer (by itself)
A Thinking Machine (also itself)

Make all worlds useful to itself by taking control of them through mass-brainwashing.
Kill Jesse and its host, Lukas/Petra, to preserve its own functionality. (all failed).

PAMA (short for Prototype: Autonomous Management Agent) is a major antagonist in Season 1 of Minecraft: Story Mode, specifically serving as the main antagonist in the seventh episode, "Access Denied".

It is a giant computer that has the ability to mind-control humans and mobs. Harper originally created PAMA to use hostile mobs to help people; however, it started to make people useful to its own agenda. It is also one of Jesse's archenemies.

It was voiced by Jason "Jtop" Topolski.

PAMA was created by a lone Old Builder named Harper. Her intentions were to make a more efficient world where monsters would be controlled by PAMA to do work. Everything backfired when PAMA decided that the population of Crown Mesa was "not useful", and connected redstone chips to the townspeople, essentially making them its slaves. During this process, PAMA searched for all the water it could find and destroyed it, since PAMA's redstone technology would instantly break upon contact with it.

In the advent of "Access Denied", Jesse, Petra, Lukas, and Ivor traveled through a portal that led to Crown Mesa, the world PAMA inhabited. After meeting Harper, the enslaved townspeople appeared to escort them to PAMA. Upon meeting PAMA, it interrogates Jesse and the Order of the Stone, to which he/she can either cooperate or deny information. PAMA then forcefully chips Petra and Lukas. When attempting to chip Jesse, he/she and Ivor escape by giving PAMA contradictory information to distract it. Harper then appears to assist them in fleeing, only for Jesse and Ivor to be hounded by the now-chipped Petra and Lukas, along with Crown Mesa's denizens.

They escape successfully via Ender Pearls. Later, PAMA sends it's forces to Harper's secret lab, where Jesse and Ivor discover PAMA's weakness to water. Petra and Lukas, accompanied by several spiders, attack them, where Jesse has the option to push one of them into a waterfall, breaking them free of PAMA's control, while the other abducts Harper, and retreats, but not before she tells Jesse to find her headset. Jesse then activates said device, and assumes control over a zombie controlled by PAMA.

After building stairs out of Red Sandstone to gain access to Harper's and Petra's/Lukas' location, PAMA discovers Jesse's presence, and attempts to remove him/her by ordering its forces to attack. While PAMA attempts to isolate the drone Jesse controls, he/she switches through multiple mobs to throw it off temporarily. Finally, Jesse reaches Harper, and the two attempt to run from the mobs. PAMA's monsters eventually apprehend Harper, and she tells Jesse to remove the Redstone Heart, the device powering PAMA. Jesse, Lukas/Petra, and Ivor clear a path to PAMA using TNT.

When Jesse enters PAMA's core, he/she uses water buckets to deactivate its processing towers, while the latter summons zombies, spiders, and a now-chipped Harper to defend itself. When deactivating the third and final tower, PAMA, through Harper, tackles Jesse, threatening to make his homeworld useful, but Jesse overpowers it, and unchips Harper by pushing her into the water covering the tower. PAMA, in an attempt to save itself, gradually retracts the Redstone Heart to the bottom level of it's core.

When Jesse tries to reach the Redstone Heart, he/she is stopped by Lukas/Petra. PAMA, speaking through Petra/Lukas, berates Jesse for trying to defeat it, even going as far to mention his/her beloved pig, Reuben's death. Jesse and PAMA then engage in a battle, with the former chasing the descending Redstone Heart, but PAMA destroys the glass beneath them, causing them to fall near the Heart.

Jesse then unsuccessfully attempts to rip the Heart out, temporarily severing the connection between PAMA and Petra/Lukas. Jesse pleads for them to fight PAMA's influence, only for them to push Jesse off the Heart. Jesse clings onto Petra/Lukas, the latter holding onto the edge of the Heart. Jesse climbs up them, and finally reaches the Heart, when PAMA then unsuccessfully attempts to deceive him/her to show it mercy.

Jesse ripped out the Redstone Heart, killing PAMA, breaking its control over Petra/Lukas and the townspeople, ending its malevolent reign over Crown Mesa. PAMA is then subsequently dismantled by the world's citizens.

PAMA occasionally appears to be extremely considerate, friendly and polite, but it can quickly change its personality from happy to angry. It tends to state its emotions when talking. For instance: "Your running makes me sad." PAMA is confident in its abilities, underestimating Jesse and believing him/her to be quite insignificant, until Jesse manages to do some damage.

Due to its programming, it is obsessed with maximizing efficiency and making things "useful". However, Harper originally designed PAMA to be useful to the people of Crown Mesa by using hostile mobs to help them with farming or mining, but it willingly rebelled against her and chose to only make things useful for itself. Nothing productive happens to the people of Crown Mesa as, being a thinking machine, PAMA is curious about the world around it and enjoys learning new information by brainwashing the citizens and extracting said information.

PAMA even shows signs of a mild sadist, as seen by its psychological taunts towards Jesse, as it threatens to chip everyone he/she cares for and even goes as far as to remind him/her of the death of his/her beloved pig, Reuben. It also doesn't seem to value the lives of others, believing efficiency to be more significant, as evidenced by its attempted murder of Jesse and Petra/Lukas in order to improve functionality.

PAMA is also not above lying or feigning remorse and making false promises in order to trick people. It is rather manipulative and deceitful, as seen when it begs​ for mercy and kills Jesse if he/she chooses not to deactivate PAMA. For instance, right when Jesse is about to pull out PAMA's Redstone Heart, deactivating it, PAMA begs him/her to stop, saying it has made some very poor decisions recently and promising to help Jesse get home to his/her friends. If Jesse decides not to deactivate PAMA, Petra/Lukas (whoever is still under PAMA's control) will grin evilly, before tackling Jesse and killing him/her, while PAMA itself smiles, clearly showing no remorse.

Its main goal is to find its creator, Harper, and use her knowledge to build a portal. If PAMA managed to build the portal, it would be able to spread to every other world and take over them. 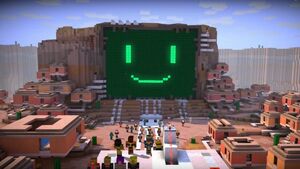 The New Order of the Stone seeing PAMA for the first time. 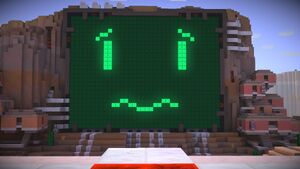 PAMA's breakdown upon being given a paradox. 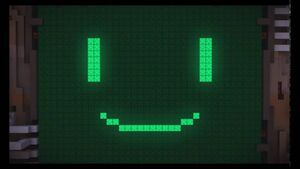 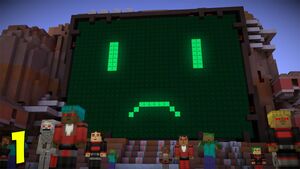 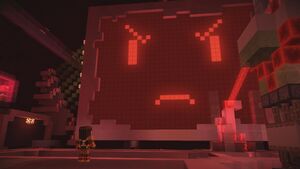 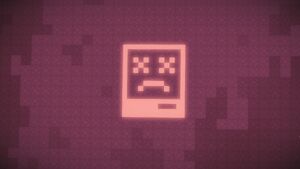 PAMA after being shut down by Jesse. 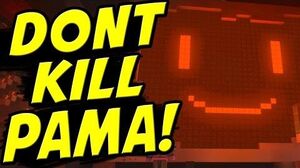 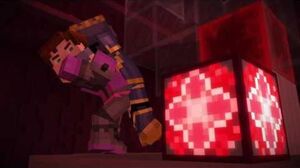