Defeat BoBoiBoy and his friends (failed)

PETAI (as known as Perisai Tempur Angkasa-I, which means Battle Space Robot-I in English), or DAISE (Destroy And Infiltrate Super Enforcer) is one of the minor character in the animated series of BoBoiBoy franchise. It was served to be Ejo Jo's combat robot and has the familiar appearance with Super Probe, except with an angry face, more firearms and black appearance.

Season 2 and the beginning of Season 3

The first version of them was introduced along with Ejo Jo. When Ejo Jo said its name, BoBoiBoy and Gang laughed. Until then, it has successfully destroyed Probe in front of Adu Du's eyes. Then BoBoiBoy and co. fought it back. No matter what the heroes do, they are useless against it. Later on, it has successfully captured Ochobot, along with Papa Zola and the students of Rintis Island. However, Ochobot escaped and used his power to let Fang summon the Shadow Dragon, while BoBoiBoy battling it. After Fang summoned the Shadow Dragon, it had no way to escape and got crushed by the dragon.

PETAI returned in Season 3 in five, they were launced by Ejo Jo to attack BoBoiBoy and his friend, however, they were destroyed by Captain Kaizo and Lieutenant Lahap, with their boss being captured by them. 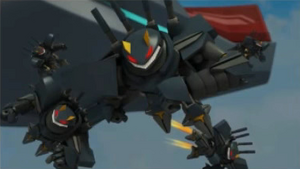