They are believed to be voiced by Komatsu Mikako and are drawn by Akira.

PT Imp Pack were humanoids who generally appeared as three female toddlers with pale blue skin nearing white, two long black demon horns on top of their black helmets that had two glowing blue eyes and black dresses. The left imp appeared as if she was trying to get the helmet on her head off while it was on her, holding two weapons in her hands and being slightly squashed by the middle imp. The middle imp was holding her hands and feet up seemingly happily and she had a gun in the inside of her mouth. The right imp was curled in a fetal position with her umbilical cord still attached and it seemed as if her helmet.

PT Boats were the basis of the PT Imp Pack. These were deployed by the USN during World War 2 and had different types, such as Elco and Higgins PT boats. These were easy to build during the war, costing little money, being small in size and very fast. They served as an upgraded version of the first-generation torpedo boats.

PT Imp Pack had superhuman speed which allowed them to have incredibly high evasion, making them difficult to land a hit on (like with weapons such as the large caliber gun), but were fragile as they had low HP (9 in their first two basic forms, 15 in their third basic form and 18 in their fourth basic form). Despite this weakness, their latest forms had the ability to perform torpedo cut-ins and since the Summer 2017 Event, airstrike, aerial support, opening torpedo as well as previous anti-imp equipment were ineffective against them. They were also able to self-multiply, appearing multiple times in one node, as well as resurrect even after being sunk, demonstrating their ability to heal themselves, which would equal as very formidable opponents. They were weak against support shelling and LBAS bombing.

The accuracy boost of the PT Imp Pack's guns the first two days into their first appearance of the game were not properly implemented by the mechanics, causing them almost impossible to defeat due to Destroyers not being able to hit them. The extent to this strength was that some admirals needed cruiser, battle secondary guns and support airstrikes to sink them. Subsequently after this event, the bug was fixed and destroyers were able to hit them, making them evidently more weaker. 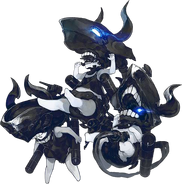 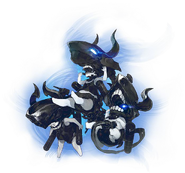 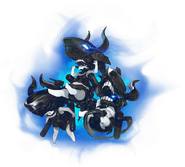 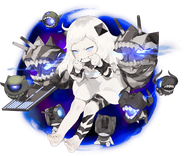 With the Northern Little Sister 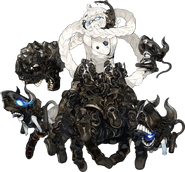 With the Supply Depot Princess 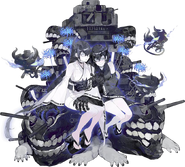 With the Night Straight Princesses

With the (Black) Night Straight Princess 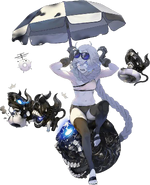 With the Supply Depot Princess
Add a photo to this gallery

Retrieved from "https://villains.fandom.com/wiki/PT_Imp_Pack?oldid=3502211"
Community content is available under CC-BY-SA unless otherwise noted.