Get revenge on David Miller and his fake family for stealing his drugs and return them to be back in business (both failed).

Pablo Chacon is one of the two main antagonists (along with Brad Gurdlinger) in the 2013 film, We're the Millers.

He was portrayed by Tomer Sisley.

He is a Mexican drug lord who got fooled by wealthy American drug lord Brad Gurdlinger and seeks to reclaim his property (his 4,000 pounds of marijuana) that was supposed to be smuggled by David Miller and eventually kill him due to Gurdlinger's foolishness.

But instead, he witnesses Rose O'Reilly's strip dance after the Miller family explained that they are not a real family (with Rose who is actually a stripper). This gives the Millers the opportunity to escape and stun the Chacon and his right-hand One-Eye.

On the night of July 4, Pablo catches up to the Millers, as well as the Fitzgeralds. He holds them at gunpoint while cursing them for messing with him. David who'd now found his redemption and become cavalier, brusque and atones his actions. He begs the vindictive crime lord into sparing the others and only kill him.

Chacon ignores the begging and then raises his gun, but he is then distracted by the fireworks that launch for July 4. David knocks Chacon down and hits away the gun. He is shot in the left arm (thanks to the Casey and Rose who've never wielded the gun before) but gets up again and grabs a python from his back pocket and attempts to neutralize David. Kenny (with newly attained confidence) rushes over and punches Pablo, unconscious, leading him to get a kiss from Melissa Fitzgerald, who was astonished by his heroic courageousness. Pablo Chacon is later taken to America under custody, ending his drug trafficking activities for good.

David and his makeshift family had to enter witness protection pending the trial of Gurdlinger and Chacon. 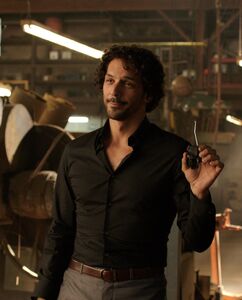 Gurdlinger with David.
Add a photo to this gallery

Retrieved from "https://villains.fandom.com/wiki/Pablo_Chacon?oldid=3924303"
Community content is available under CC-BY-SA unless otherwise noted.