NOTE: This article is about the incarnation of Pachacamac from the 2020 film. The mainstream version can be found here: Pachacamac (Sonic).

Leader of the Echidna Tribe

Pachacamac is a minor yet pivotal antagonist in the 2020 live-action film Sonic the Hedgehog, which is based on the blockbuster video game series of the same name developed by Sega.

He is the leader of the Echidna Tribe who wants to obtain great power or life source for his own purpose.

Before the events of the film, Sonic was still living with his caretaker Longclaw. Pachacamac and the tribe knew Sonic's existence and were secretly tracking him down through the woods for unknown reasons, presumably to gain his power.

After Sonic got back home, he and Longclaw are attacked and chased by the tribe. While trying to escape, Longclaw is shot in the back by Pachacamac. As Pachacamac and the tribe continue to chase after them, Longclaw uses a Ring and opens up a portal to another world, warning Sonic to never stop running. Once Sonic enters through the Ring to the Earth and sees Longclaw who was about to fight against the Tribe, he tries to go back to her but the Ring closes.

It is unknown whether Longclaw was killed by the Tribe or not. 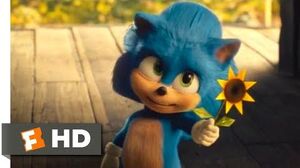