Chief of the Knuckle Clan

Obtain the Chaos Emeralds and use their power so the Knuckles Clan could reign supreme (failed).

Chief Pachacamac is the posthumous overarching antagonist of the 1998 video game Sonic Adventure and of its adaptation in the 2003 anime Sonic X known as the "Chaos Saga". He was the father of Tikal, ancestor of Knuckles and former leader of the Knuckles Clan whose selfish actions led to the destruction of his people and nearly the world at the hands of Chaos.

He was voiced by Steve Brodie/Tōru Ōkawa in the game and by Oliver Wyman/Toshihiko Nakajima in Sonic X.

Pachacamac appears as an anthropomorphic echidna similar to Knuckles, but with dark red fur, thick white eyebrows and a white beard. He wears an ancient tribal outfit, white gloves with spiked knuckles, has white tribal markings on his hair and dreadlocks, and wields a spear.

Pachacamac was a stubborn and ruthless leader who would rather make war instead of peace and always believed he was in the right. He was always looking for ways to empower his people and would show no mercy to anyone standing in his way, not even his own family.

Pachacamac was a formidable warrior in battle, and also possessed some degree in magic. As leader of the Knuckles Clan, Pachacamac had full authority over it. His warriors followed his every command, even when it came to attacking one of their own.

More than 4,000 years ago, Pachacamac was born into the ruling family of the Knuckles Clan, an ancient tribe of Echidnas. His mother, the chief before him, desired ever-lasting peace with the clan's neighboring countries, while he wanted to conquer them instead. At some point, he sired a child of his own named Tikal, who was peaceful like her grandmother.

When his mother died, Pachacamac became the new chief of the tribe. Under his iron-fisted rule, the Knuckles Clan became a militaristic nation that broke all ties with their neighbors by attacking them, stealing their valuables and killing any who would defy them. Tikal often argued with her father about warring against the other tribes and attempted to persuade him to stop, but all her attempts fell on deaf ears.

Eventually, Pachacamac came into conflict with the Nocturnus Clan. When the clan unleashed their prototype Gizoids, Pachacamac became desperate to find an advantage.

Pachacamac then committed the gravest taboo of all by planning a raid on the shrine of the Master Emerald, which was sacred to all. His plan was to take the Master Emerald as well as the seven Chaos Emeralds by force and use their power to make the Knuckles Clan invincible. Tikal, who had just recently became friends with the local Chao of the altar, as well as its guardian, Chaos, was horrified by her father's plan and begged him to leave the emeralds be, but again failed to change his mind.

The Echidna chief leads a group of his best and most loyal warriors to the shrine to take the emeralds (and somehow set it on fire), but also finds Tikal and the Chao standing in their way. Pachacamac orders his daughter to stand aside, but the girl stands her ground alongside her friends, warning her father that their greed will lead only to self-destruction and begged him one last time to end the madness. Once again, Pachacamac refuses to heed the wisdom in his daughter's words and orders his soldiers to charge through Tikal and the Chao, injuring them.

After witnessing the defilement of the sacred altar and all his friends get hurt by the chief's soldiers, Chaos becomes enraged. As soon as Pachacamac and his men approach the Master Emerald, Chaos appears before them, much to the chief's horror. He then absorbs the negative energy of the Chaos Emeralds, transforming himself into Perfect Chaos, and slays Pachacamac along with his warriors.

After Pachacamac's death, Perfect Chaos went on a rampage, laying waste to the Knuckles Clan. To stop Chaos from destroying the rest of the world, Tikal seals both him and herself inside the Master Emerald for all eternity. The resulting energy burst caused a section of the land to float into the sky and become Angel Island. Remorseful over what they had done under Pachacamac's reign, the surviving members of the Knuckles Clan chose to repent for their actions by becoming the eternal guardians of the Master Emerald to prevent it from falling into the wrong hands again.

4,000 years later, Knuckles, the last of the Knuckles Clan and possibly the Echidna race, was put in charge of guarding the Master Emerald like his ancestors. However, Pachacamac's actions would then come back to haunt him when the mad scientist, Dr. Eggman shattered the Master Emerald, unleashing the vengeful Chaos upon the world again. In spirit form, Tikal would assist Knuckles as well as Sonic, Tails, Amy, Gamma, and Big in their individual quests by showing them the events of the past, including her father's actions. After Super Sonic was able to defeat Perfect Chaos, he and Tikal left to an unknown location to live in peace, finally putting Pachacamac's crimes to rest.

Pachacamac appears in the Sonic the Hedgehog spin-off comic book series by Archie Comics, as well as the anime series, Sonic X. 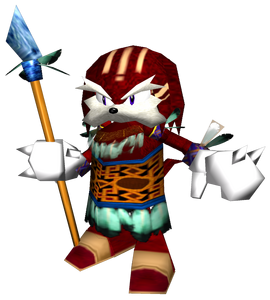 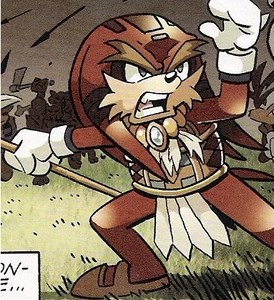 Pachacamac in the Archie comics. 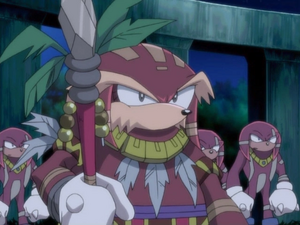