To rid the world of pedophiles

The Paedofinder General is a character in the British satirical cartoon series Monkey Dust, a show which is notorious for its dark humor, satirization of the modern society, and handling of taboo topics. He is a self-proclaimed pedophile hunter who hunts and executes potential pedophiles. However, many of them are innocent people and his "evidence" is usually absurd (for example, he executed a mother for making photos of her newborn child). Even though his acts are atrocious, he is praised by people in the universe of Monkey Dust. He is sometimes followed by a group of people in cloaks who help him in his crimes.

The Paedofinder General is a tall man with loose black hair and pale green skin. He wears a costume akin to that of Matthew Hopkins (cir. 1620 - 1647), the famous British witch-hunter known as Witchfinder General.

The Paedofinder General is a vicious, bitter, paranoid, and vituperative man who is extremely devoted to his work of finding and executing pedophiles. He is an ominous and imposing character who cites justifications to his terrible acts, saying usually " ...by the powers invested in me by tabloid-reading imbeciles, I proclaim you guilty of pedophilia!". In one episode, he is seen looking at online child pornography, claiming its "for research", implying that he might be a pedophile himself. When he appears, he is followed by green gusts of smoke.

As mentioned above, he uses any possible thing against an alleged pedophile, and has no qualms about killing anyone; be they a show host, a teenager, a homosexual couple or even a group of children, whereas he justifies the latter by saying that victims of sexual abuse grow up to be abusers themselves. 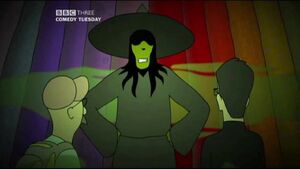 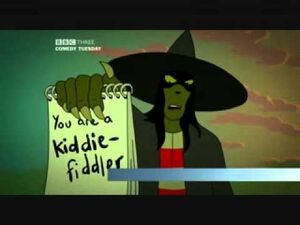