Killing people (especially with his pen).

Take over the Triads after his fathers death.
Gain power and influence for his cartel.
Escape to Kyrat to avoid his death from his conspirators.
Help Mohan with his revolution and take down the king.
Take control of the throne and prevent Mohan from gaining power so his fanatical influence is thwarted.
Maintain his rule and modernize Kyrat.
Destroy the Kyrat traditions and prevent old traditions from advancing Kyrat.
Install Ajay as his heir so he no longer has to rule (all succeeded).
stop Ajay Ghale (failed).

Pagan "Gang" Min (蒲甘明) is the main antagonist of the 2014 video game Far Cry 4. He is the self-appointed leader over a region named Kyrat, located in the Himalayan Mountains. He rules with an iron fist, terrorizing the people with his militia and trafficking drugs. Under his leadership, the resistance group The Golden Path formed to oppose his tyrannical leadership.

He was voiced by Troy Baker, who also voiced Joel Miller in The Last of Us series, Delsin Rowe in inFamous: Second Son, Revolver Ocelot in Metal Gear Solid V: The Phantom Pain, Erron Black in Mortal Kombat X and Mortal Kombat 11, Shinnok in Mortal Kombat X, Magni in God of War (2018), Higgs in Death Stranding, and many others.

Son of a mid-level drug boss in the Golden Triangle, Pagan Min was born in Hong Kong, originally named Gang Min by his parents. His father was a small fish in a big pond, and even as a young man, Pagan was as ambitious as he was flamboyant. This peacocking is what drove a wedge between father and son. Pagan worked for his father but hated him. He was frustrated as a lieutenant and saw his father as a dinosaur.

After his father's unfortunate passing winch Pagan played a role in, Pagan inherited his small piece of the pie. He then left his old identity behind and adopted the moniker "Pagan," naming himself after an old Burmese king who had murdered his family to take control. Pagan quickly started carving himself more of the pie he believed he deserved: he built considerable assets, a small private army, and started angering his allies in the heroin trade. He didn't fit in, and It was only a matter of time before the old guard decided to have him killed.

This is when his eyes fell on Kyrat, a small failed state with multiple warring factions in the wake of the collapse of its monarchy. He managed to escape China and allied himself with the Royalists, propping up a distant heir to the throne. After a few bloody months, Pagan and the united Royalists took the palace by storm, but Pagan betrayed the Royalists by murdering the heir in the castle and seizing the throne for himself. He then started a purge off anyone who didn't fall in line, executing his opposition. This betrayal formed the Golden Path, a small resistance movement dedicated to overthrowing Pagan, which was lead by Mohan Ghale.

The rebellion was met with little success against Pagan's well trained and well-armed mercenaries. During these events, Mohan Ghale developed an increasingly strained relationship with his wife, Ishwari. Ishwari wanted to fight alongside the Golden Path rebels, but Mohan did not feel this was appropriate for a woman. In response to her insisting, Mohan sent her to Pagan's palace as a spy, Hoping that the source being so close to the truth would sufficiently horrify Ishwari to make her withdraw any further attempts to help with the rebellion. However, Mohan's actions backfired when not only did Ishwari excel as a spy, but she simultaneously began an affair with Pagan Min. Attempts to reconcile Pagan and Mohan failed.

The affair culminated when Ishwari had her second child with Pagan, a daughter named Lakshmana. Mohan killed Lakshmana, for reasons unknown, and Ishwari soon after murdered him and fled with Ajay to the United States. This caused Pagan to isolate himself in the Royal Palace and is cited by many as the reason for his current behavior.

Pagan is introduced to the player when, Ajay Ghale, son of Mohan and Ishwari, returns to Kyrat to place his mother's ashes next to Lakshmana. Pagan Min learned of Ajay's passage via the border with India and gave orders for Ajay's bus to be intercepted. The operation is botched, as the soldiers tasked with stopping the bus open fire on the bus when the driver shoots the squad commander. Immediately after these events, Pagan arrives via helicopter. Pagan becomes angry with the apparent leader of the soldiers because his mission was to stop and capture Ajay, not shoot the bus. He stabs the soldier in the neck with his pen, killing him.

After this, Pagan has a bag placed over Ajay's head, and he, along with Darpan, is brought to Paul De Pleur Harmon's compound. Ajay, De Pleur, Darpan, and Pagan are sat down at a dinner table where Pagan explains himself to Ajay. However, Darpan is caught texting Sabal for help, which leads to De Pleur and Pagan leaving Ajay to himself. After these events, Ajay then has the choice to either escape the compound and meet up with the Golden Path rebels, or wait near the table for Pagan to return, triggering an alternate ending. Pagan frequently interacts with Ajay via radio during the events of the game. Throughout the game, Pagan's interactions with Ajay reveal an ambivalent attitude towards him, despite Ajay supporting the Golden Path.

After storming the Royal Palace, Ajay is presented with the choice to either kill Pagan, where he sits or spare his life and spread his mother's ashes in Lakshmana, as he originally intended. If the player spares Pagan and spreads Ishwari's ashes in the Lakshmana Memorial, Pagan will leave peacefully via his helicopter, leaving Kyrat in Ajay's hands. Or the player can kill Pagan as he attempts to leave Kyrat via shooting the chopper where the game ends with credits. If this ending is chosen - after traveling through Pagan's Royal Fortress, there will be a crash site where the helicopter landed, (just beside the road leading up to Pagan's palace) with Pagan's body lying beside it. You have the option to loot his body and retrieve a pen, a pin, and 250,000 money.

Pagan, along with Vaas and Joseph, will appear as a playable character in the Season Pass of Far Cry 6.

Pagan Min is known for his colorful dress, eccentric violence, and generally lackadaisical approach even to highly climactic events. His attitude towards Ajay Ghale, despite Ajay working with the Golden Path and making an attempt on his life, is strangely ambivalent. In fact, throughout Far Cry 4, Pagan has several opportunities where he could easily have taken Ajay's life but chose not to.

Pagan himself claims that he wants to change Kyrat and bring the nation into a glorious future in the ashes of the old society. Whether or not there is a single slice of truth in that, as he seems only to take care of his own needs, is unknown, even though Ishwari Ghale may or may not have had a positive influence on him. Pagan's rule of Kyrat is very much characteristic of a tyrannical and ruthless dictator, reminiscent of the totalitarian and oppressive personality cults surrounding historical communist dictators such as Mao Zedong, Kim Il-Sung, and Joseph Stalin. He controls all media in Kyrat, which he floods with propaganda for his rule and regime.

However, the events of Far Cry 4 reveals that Pagan Min has become a recluse in his royal palace, passing off the burden of leadership to his lieutenants Yuma Lau, Noore Najjar, and Paul "De Pleur" Harmon. Yuma, in particular, has become resentful of Pagan, lamenting that he has become weak compared to the ruthlessness of his younger self. Yuma blames Ishwari Ghale for this change in Pagan's disposition, suggesting that Pagan falling in love with Ishwari caused Pagan to temper the former strength and ruthlessness which Yuma was initially drawn to. 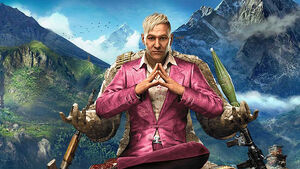 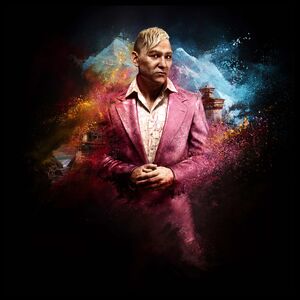 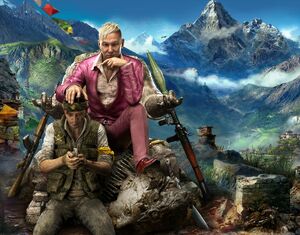 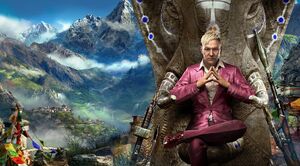 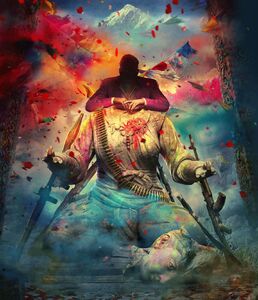 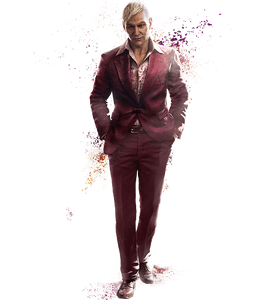 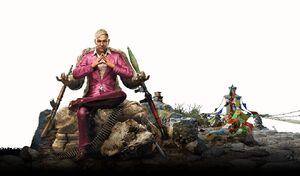 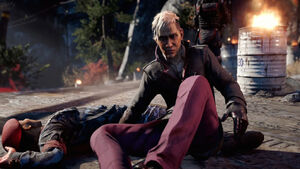 Pagan after killing one of his soldiers. 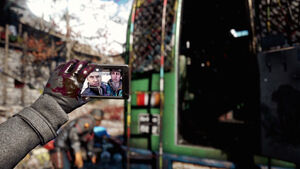 Pagan takes a selfie with Ajay. 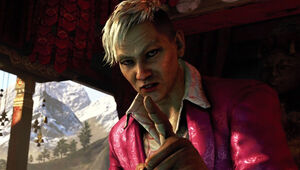 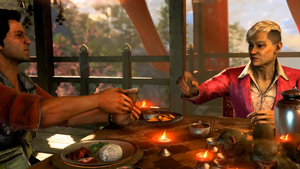 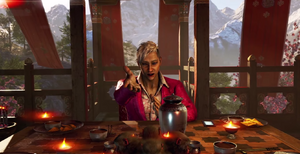 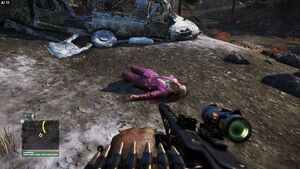 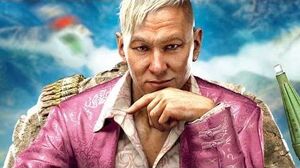