Villains Wiki
Register
Don't have an account?
Sign In
Advertisement
in: Ace Attorney Villains, Villains by Proxy, Burglars,
and 12 more

Parent Thief
Paht Roht is the victim of the first case in Phoenix Wright: Ace Attorney - Spirit of Justice. He was a treasure guard who guarded the treasure box that has the Founder's Orb until he was murdered by Pees'lubn Andistan'dhin.

Paht was once a monk but had to give up due to not supporting his family especially his younger brother and sister who was on the verge of death. He then got a job as a Tehm'pul temple guard and was put in charge of guarding the treasure box which contained the Founder's Orb. While working in the temple, he be-friended Ahlbi Ur'gaid who was training to become a monk and he would often give him advice and encourage him to dedicate himself in training.

However his job as a Tehm'pul temple guard was not enough to help or support his family causing him to go in a life of burglary.

He then encountered Ahlbi Ur'gaid and pointed a gun at him demanding to know if he is the thief. A blackout then occurred and Pees'lubn Andistan'dhin discovered Rohl who was holding the treasure box and due to him being afraid that the treasure box has nothing inside, he kills Paht with his instrument and tried to pin the blame on Ur'gaid.

Pees'lubn Andistan'dhin was then arrested for murdering Rohl and trying to steel the Founder's Orb. 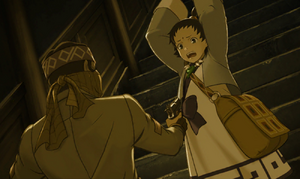 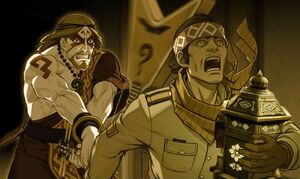