The Diva of Tomorrow

To be the top diva on the Divison

Saraya-Jade Bevis (Born August 17, 1992 in Norwich, Norfolk, England) (Paige) is a current WWE Diva who is best known as the first ever NXT Women's Champion, and is also a former 2 time WWE Divas Champion.

Paige debuted for WWE's developmental territory, Florida Championship Wrestling, as a villainess—serving as one-half of the Anti-Diva Army with Sofia Cortez. Paige and Sofia would constantly attack and bully a number of FCW's Divas, including Kaitlyn and Audrey Marie. Paige's alliance with Sofia ended in July 2012 when Sofia turned against Paige out of jealousy during a match against Audrey Marie. After FCW became the new-look NXT, Paige would lose to Sofia in a grudge match, and with that, her villainous role came to an end, as she would go on to become the most popular Diva on NXT.

Paige was called up to the main roster on April 7, 2014 and congratulated AJ Lee on her Divas Championship defense at Wrestlemania XXX the previous night, only to be goaded into a title match, which Paige won to become the new champion. After successful title defenses against Tamina Snuka and Naomi, Paige lost the Divas Championship to the returning AJ on the day after the Money In The Bank PPV. During that match, Paige displayed villainous traits; yelling "This is my house!" to AJ and acting arrogant to her. After losing the title, Paige pretended to act nice to AJ and teamed with her in a pair of tag team matches, which they won. However, Paige was unable to dethrone AJ at Battleground on July 20. During that match, Paige would actually cheer for AJ to get back up after she was knocked down.

On the following night on Raw, Paige once again teamed with AJ in defeating Emma and Natalya in a tag team match, and after the match ended, she brought AJ back to the ring to celebrate with her. However, once AJ's back was turned, the evil Paige viciously attacked her inside the ring and later took the assault outside the ring by tossing her to the ringpost and the announce table. After turning into a villainess, Paige mocked AJ by skipping out of the arena. Paige appeared on Raw Fallout and told Eden Stiles that she warned AJ not to underestimate her and that this was "her house."

Even after the attack, Paige insisted that she and AJ were still friends. But on the following week's edition of Raw, Paige called AJ "crazy" during a verbal confrontation, which led to AJ attacking her. Four nights later on SmackDown, Paige attacked AJ and shoved her off the entrance ramp; giving AJ whiplash.

On January 5, 2015 episode of Raw, Paige's run as a villainess ended as she rescued Natalya from Nikki Bella, This led to non-title match between Paige and Nikki the following night on Main Event, which Paige won. Following weeks of tormenting by the Bella Twins, Paige unsuccessfully challenged Nikki for the Divas Championship at Fastlane. and in a rematch that took place on the 2 March episode of Raw. Following the latter of the matches, Paige's former rival AJ Lee saved her from an attack from the Bella Twins. Paige and AJ subsequently teamed up to challenge the Bella Twins, defeating them in a tag team match at WrestleMania 31. which would be Paige's WrestleMania debut.

On the 13 April episode of Raw, Paige won a battle royal to become the number one contender to Nikki's Divas Championship. After the match, Naomi viciously assaulted Paige, injuring her in the storyline and unable to compete at Extreme Rules. After weeks of being cheated out of the Divas Championship by the Bellas, Paige was aligned with Charlotte Flair and Becky Lynch to form Team PCB, and the trio defeated Team Bella and Team BAD at SummerSlam.

On the next day, Paige failed to win the Divas Beat the Clock challenge against Sasha Banks. As a result, Charlotte became the #1 Contender for the Divas Championship. Charlotte won the title from Nikki Bella at Night of Champions, but while Paige celebrated her victory with Becky Lynch and Ric Flair, she didn't appear to be happy for her, displaying a villainous persona in the process. Paige became a villainess on the next day's episode of Raw, when she began berating Charlotte and Becky Lynch, as well as the rest of the Divas Division, in a worked shoot promo. Among other things, the villainous Paige said that she started the Divas Revolution and that Charlotte wouldn't be where she was if it wasn't for her Hall of Fame father, Ric Flair. This also led to Paige having multiple confrontations with Natalya.

Throughout October, Paige, working as a tweener, acted as if she wanted to reconcil with Lynch and Charlotte. the following week, after the loss of a match to Team Bella, Paige attacked Charlotte and Lynch, thus turning her into the villain.

In November, Paige became the new number one contender for Charlotte's Divas Championship, after winning a fatal four–way match involved Brie Bella, Sasha Banks and her former team parter, Becky Lynch. She was unsuccessful in capturing the title on three occasion, which is at Survivor Series where she lost by submission, On the following Raw in a rematch, which ended in double count-out and lost in a rematch again at TLC. The following match at Tribute to the Troops 2015, Paige teamed with Team B.A.D (Naomi, Tamina Snuka, Sasha Banks) in a successful effort against Charlotte, Becky and Team Bella (Brie Bella and Alicia Fox). Paige took some time off due to concussion.

Paige returned on the 18 January 2016 episode of Raw, once again as a fan favorite, accompanying her former rival Natalya to her match against Brie Bella.

Paige was portrayed as a bully during her villainous role in FCW. During her angle with AJ, Paige displayed sociopathic tendencies en route to turning into a villainess. She has also displayed delusion by continuously attacking AJ and then insisting that she's still friends with her. 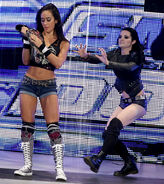 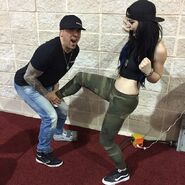 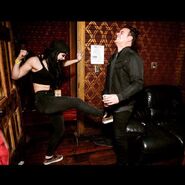 Add a photo to this gallery
Retrieved from "https://villains.fandom.com/wiki/Paige?oldid=3551384"
Community content is available under CC-BY-SA unless otherwise noted.