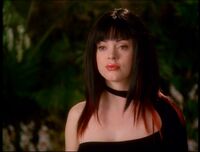 Paige Matthews is an alternate universe version of her heroic counterpart from the main Charmed Universe.

She was portrayed by Rose McGowan who also portrays Courtney Shayne in Jawbreaker, Marique in Conan the Barbarian and Cora in Once Upon a Time.

She is a half witch/darklighter who is a part of the Evil Charmed Ones. She was presumably the daughter of the darklighter, Sam Wilder and an evil witch, Patricia Halliwell. She's the half sister of Piper and Phoebe Halliwell. She did battle with the heroic Paige in the beautiful demonic underworld. She later helped the good Charmed ones along with her sister Phoebe save their infant nephew, Wyatt Halliwell, from the rogue darklighter, Gideon who's trying to save him from becoming good (much like his counterpart in the Main Charmed Universe is preventing Wyatt's counterpart from becoming evil).