Pain Bot, is a sentient and mobile torturing machine created by Brother Blood and utilized to battle, torture, and interrogate the Teen Titans. It used to be a minor antagonist in Teen Titans Go!, before it betrayed its creator in "Little Buddy" to become friends with Cyborg, a member of the very team of heroes who it was programmed to destroy. Since then, Pain Bot has been a hero, with a few minor quirks.

He is voiced by Scott Menville in Season 1, and Khary Payton in Season 2.

The Pain Bot makes its first appearances in "Waffles". When Brother Blood wants the Titan's voice code to unlock their armory, he plans to endlessly torture them with the newly constructed Pain Bot. Though Robin, Raven, and Starfire give in, Beast Boy and Cyborg refuse to do so simply because they are playing a game where they can only say "Waffles". This leads to excruciating torture until Brother Blood is too annoyed to continue and forfeits.

Later, Blood still utilizes his torture machine to not interrogate the Titans, but battle. After he is defeated, Pain Bot is rendered docile and harmless since no one malevolent is in control of him. Despite the Titans' veto against it, Cyborg secretly attempts to make Pain Bot his "pet". During this, the Pain Bot constantly tries to brutally murder the Teen Titans when their backs are turned, but is stopped by Cyborg. Despite Pain Bot's sociopathic and sadistic programming, he and Cyborg manage to form a secret bond that is eventually revealed. Though the Titans think Pain Bot can be cute, his violent and murderous outbursts are too much to handle and he is cast out of the tower.

They manage to organize a tournament deciding whether or not Pain Bot can stay by having fight with the Titans' pets, including Robin's bird, stick, boombox, and sentient birdarang, Beast Boy's wolf, and Raven's demon. Thanks to the endless amounts of Pain Bot's fighting utensils, he either beats or kills them all. However, he is defeated by Starfire's supposedly calm pet, Silkie, when he was eaten.

As of this episode, Pain Bot was officially redeemed as he spent the episode being friends with the Titans and partying with them. When he heard that The Titans had been trapped by The Brain, he and the other little buddies teamed up to defeat the evil villain and save their friends, officially making Pain Bot a hero.

Following the loss of his former ally, Brother Blood constructs a second robot called Hurt Bot, who remained loyal to his creator. 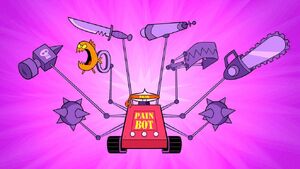 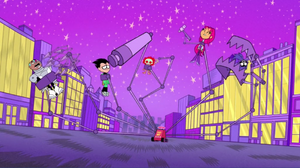 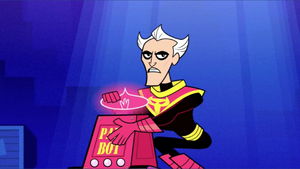 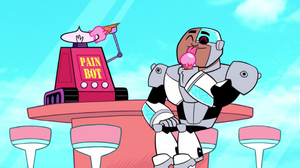 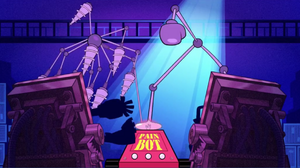 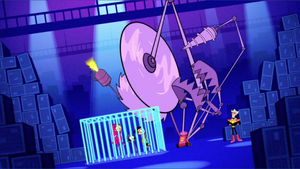