Pain and Panic are the secondary antagonists from Disney's 35th full-length animated feature film Hercules (which is based on the legendary Greek hero of the same name), supporting antagonists in its 1999 midquel Hercules: Zero to Hero, and recurring characters in the TV show. They are a pair of incompetent imps and the frequently abused minions of Hades.

Pain and Panic play the essential role in any villain's quest for power - they constantly unwittingly mess things up and give Hades outlets to vent his anger. As per usual, whenever a villain tells his incompetent stooges to do something for him, they make mistakes that make us wonder why he does not just do things on his own in the first place. However, Pain and Panic were occasionally useful to Hades, such as making Hercules mortal (and by extension able to be killed) and luring Pegasus into a trap.

Pain is an overweight magenta imp and Panic is a skinny teal imp. They came into his Underworld to help and assist Hades, but they are not the best, as they did not let Hades know that the three Fates arrived.

They can transform into anything, such as worms, snakes, little boys, woodland critters, worthless bugs, and birds. At one point, they transformed into a female horse to lure Pegasus into a trap. At another, they turned into little boys pretending to be trapped under a gigantic boulder to set up the battle between Hercules and The Hydra.

Pain and Panic received the task from Hades to kidnap infant Hercules and turn him mortal. But since Pain and Panic did not feed him every last drop of the mortality potion, Hercules still contained his godlike strength. When an elderly couple found Hercules, Pain and Panic transformed into snakes to scare them off and finish off Hercules. Unknown to them, he still had his strength, and hurled the two imps into a nearby mountain, so the two decided to let Hades think they took care of him.

However, as the movie progress, Hades discovers from his slave Megara that Hercules is still alive. Once this is found out, Hades brutally punishes Pain and Panic through acts of violence.

Towards the end of the film, Pain and Panic grow fond of Hercules, as they partake in his merchandise (highly disliked by Hades, however). Hades screams in anger as he maims Pain for wearing Hercules shoes and Panic for drinking out of a cup with Hercules's face on it. They even watch as Hercules becomes a god again after saving Meg from the Pit of Death, and then knocks Hades into the pit where he is dragged into the depths of the pit by the souls, and both are glad at the idea that he will be trapped there forever, as they are now free from his wrath.

Pain, Panic, and several other villains that Disney faces appear in the Disney cartoon series House of Mouse. One episode "Jiminy Cricket" features Pain and Panic tricking Pinocchio out of his conscience Jiminy Cricket and into hanging out with them. Another episode "Halloween for Hades" also features Pain and Panic, who are unpleased with the fact Mickey is turning Hades good to impress Maleficent, but are relieved later on when Hades remains being evil.

As their names imply, Pain often suffers injuries, while Panic has many panic attacks. 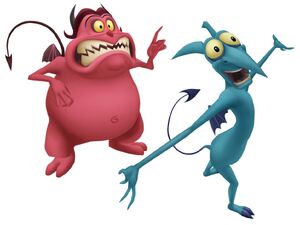 Pain and Panic in Kingdom Hearts.

Pain and Panic turning to worms. 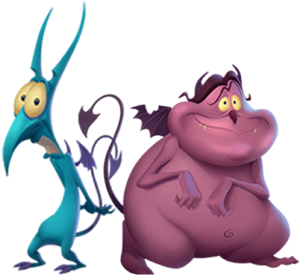