Criminal
Member of the Phantom Troupe

Pakunoda is a major antagonist in the manga and anime Hunter x Hunter. She was a member of the Phantom Troupe, and was one of the original members.

Pakunoda is a tall woman with short blonde hair reaching no further than her neck, and a prominent aquiline nose. She usually wears a business suit, which is a dark purple suit that exposed much of her cleavage. She also wears a pair of flat, pink shoes.

Pakunoda was one of the original members of the Phantom Troupe, and was recruited by Chrollo Lucilfer in Meteor City. She participated in the genocide of the Kurta Clan.

Pakunoda traveled to Meteor City to attack the mafia's auction. She stayed behind while other troupe members attacked the auction. After Uvogin was killed by the "Chain User", she helped capture Gon and Killua. She read their minds, but as they didn't know that the "Chain User" she was referring to was Kurapika, they didn't give her any information.

Pakunoda participated in the massacre of the mafia. Afterwords, she pretended to work for the auction order to steal all of the items. After Chrollo stole the ability "Lovely Ghostwriter", he used it to tell the future, and the prophecy predicted that Pakunoda, along with other members of the troupe, would die. Pakunoda helped deduce that the Chain User must be a member of the Kurta clan.

Pakuoda travelled with Nobunaga to hunt Kurapika and the other Nostrade bodyguards. They captured Squalla, and she read his mind ad learned about Kurapika. She then threatened his girlfriend, causing Squala to react angrily, so Nobunaga killed him. She shot a memory bomb into Nobunaga to give him the information. When Gon and Killua were recaptured, she read their minds. However, the lights went out, and they injured Pakunoda. It is revealed that Chrollo was captured. Kurapika called and demanded that Pakunoda not share the information she got from Gon and Killua, and meet with him and exchange Chrollo for Gon and Killua.

Pakunoda took Gon and Killua to trade for Chrollo. She asked them why they didn't escape since she was injured, and therefore kill Chrollo. They answered that they wanted to resolve the situation peacefully, and didn't want Kurapika to become a murderer. She ended up meeting Hisoka, who joined them, hoping to battle Chrollo. Once they met with Kurapika, he put a Judgement Chain on her heart, which would kill her if she told any information about Kurapika to the Phantom Troupe.

After Pakunoda returned to the hideout, she used Memory Bomb to give all of the information to the original Troupe members, thereby sacrificing herself. After she died, Feitan and Phinks delivered a message from her to Gon and Killua, thanking them for not trying to escape during the exchange. 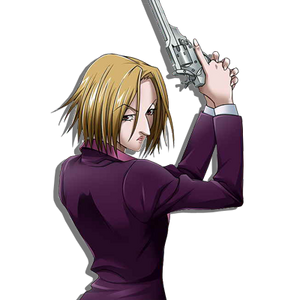 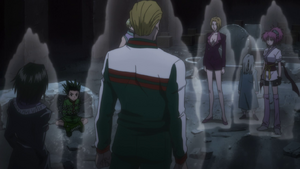 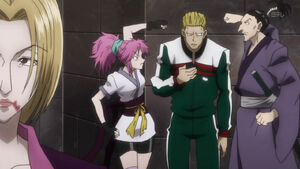 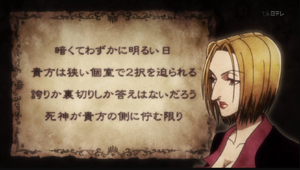 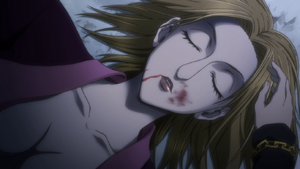 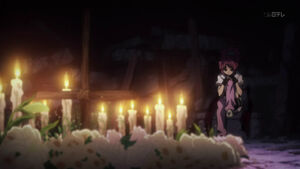 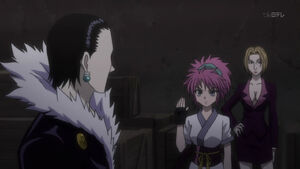