Paladin was a mercenary and private investigator. Though sometimes an Anti-Hero, his relentlessly selfish nature has seen him sometimes operate as a villain instead.

Paladin was later employed by Silver Sable to investigate a conspiracy which threatened her native country of Symkaria, and he allied with Spider-Man. Paladin was then hired by Diamondback to raid Serpent Society headquarters. He was captured, but freed by Captain America. Paladin accompanied Captain America in his search for Diamondback, the Asp, and Black Mamba. With his new allies, Paladin battled Superia's horde of female superhumans.

An unabashed womanizer, Paladin would often flirt with any woman who caught his eye. He briefly dated the Wasp at a time when she was separated from Hank Pym, much to the Black Knight's jealousy, who was also attracted to her. For a time, he enlisted Generation X into helping him retrieve a sword for Adrienne Frost, the sister of Emma Frost.

During this period, the mutant known as Jubilee was strongly attracted to Paladin, but that affection disappeared when Generation X and Paladin later went their separate ways. He has also been a longtime ally to Silver Sable and her Wild Pack organization, working for pay, of course. He once helped them protect a scientist from a kidnapping attempt by the Heroes for Hire, a group he would later join. His main opponent was Misty Knight, who seemed to be an equal match.

Paladin has a certain amount of honor. For example, he was once hired by a corrupt government to assist rebels as part of a sting operation. He aided the rebels in a bomb-laying operation at a government facility. When the rebels were caught, his government handler remarked how lucky they were that the bomb had not gone off. Paladin replied, "I'm sorry, that would have been extra," and activated the bomb by remote control while driving away.

He was offered 10 million dollars by mobster Vincent Mangano to kill the Punisher. Paladin agreed to this arrangement, but did not succeed, and in the ensuing fight both of his legs were broken by the U.S. Agent.

Paladin once took down Daredevil with a sniper rifle from a helicopter at a great distance. He did so for the FBI, in exchange for getting his record expunged. The hit, while serious, was not fatal, though did lead to Daredevil's arrest.

He was also employed once to help investigate the Life Foundation where he worked alongside Spider-Man.

During the Civil War resulting from the Superhero Registration Act, Paladin accepted an offer from Misty Knight and Colleen Wing to join the new Heroes for Hire, purely for the money. However, Paladin betrayed the team on their second mission when Misty Kinght took them to see the underground Captain America to try and talk him into a peaceful resolution after the death of Goliath.

Seeing a bigger pay day Paladin struck a trap with the intention of capturing Captain America for SHIELD. However, the trap failed to capture Shang-Chi who was able to turn the tables on Paladin. Captain America then swapped costumes with the unconcious Paladin and SHIELD took him into custody believing he was the Captain.

Paladin worked on Norman Osborns newly formed Thunderbolts team. Despite having few qualms about injuring and if necessary, killing, Paladin was one of the few members of the team to have something of a moral compass, finding the entire Thunderbolts program to be something of a cruel joke, a sentiment felt even greater by teammate Ant Man. When Osborn captured Black Widow and former-Thunderbolt Songbird, the entire team was present to what would have been their execution, a combination of Paladin, Antman and Ghost having a change of heart as well as Secret Warrior Phobos intervening saved the women's lives.

Paladin and Ant Man's friendship and reluctant villainy came to an optimistic end during Osborn's siege of Asgard. The entire Thunderbolts team was deployed to infiltrate the city and obtain Odin's Spear - a weapon famed to turn the tide of battle in favour of its holder. After defeating several Asgardians, a run in with the Mighty Avengers and numerous squabblings with other members of the team, the spear was finally obtained. Though Mister X attempted to keep the spear for himself it was Paladin who walked away with it in the end.

When the Siege drew to a dramatic close, Osborn's thrunderbolts team had offically disbanded with several members either dead or captured. Antman and Paladin were the only ones to actually escape the incident (along with Taskmaster and Constrictor), with the latter still in possession of Odin's spear.

Recently Paladin surfaced in New York city during Shadowland again as a mercenary, this time hired to eliminate mobsters. When his target was found dead baring the insignia of Ninja clan The Hand Paladin initially assumed the murder had been committed by vigilante Shroud, who was also investigating the suspicious crime. After a brief confrontation, Shroud reasoned that the murder was too severe to be of Daredevil's doing and suggested the two should team up to determine the real perpetrator. Paladin only aggreed on the basis that someone else having killed his quarry meant that he would not be paid and therefore wanted to get even.

Both heroes sleuthing brought them to bionic-private investigator Misty Knight and international bounty hunter Silver Sable, who recognized Paladin instantly. All four individuals were in fact investigating the same crime and resolved to work together. On a hunch of Misty's Paladin went to New York's Chinatown district in search of Mr. Negative, a crime lord who may have been behind the murders. This turned out to be a dead end as Negative had already been probed by Spiderman and Shang Chi and subsequentely attacked by The Hand.

Eventually Misty and Silver deduced the murders were in fact the actions of several New York policemen disguised as Hand Ninja and getting revenge on criminals who had narrowly skirted conviction. The Hand themselves were furious at being impersonated and a battle erupted between all parties. Afterwards, thanks to the four heroes combined efforts, The Hand were subdued and the corrupted policemen all arrested. It is unknown if Paladin recieved his pay from the entire encounter.

Paladin served as a member of Heroes for Hire and developed feelings for Misty Knight, working alongside several heroes in various missions he discovered that the Heroes for Hire team was set up by the Purple man to eliminate rival criminals. When Purple man set up his own Villains for Hire team, Paladin went undercover as the teams Scourge. 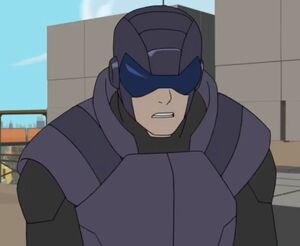 Paladin in Spider-Man 2017.
Add a photo to this gallery

Retrieved from "https://villains.fandom.com/wiki/Paladin?oldid=4100552"
Community content is available under CC-BY-SA unless otherwise noted.