Elite army of wizards at their command

The Palamecian Empire is a powerful imperialist nation and the main antagonistic faction of Final Fantasy II.

Seeking to dominate the world, the Emperor of Palamecia made a pact with Hell and summoned a powerful army of demons with which to conquer more territories for his empire. The Palamecian Empire then promptly invaded its neighboring kingdoms of Deist and Kashuan, as well as Fynn, the home of the four main characters of the game. These four youths flee the Empire's forces, with three of them (Firion, Maria and Guy) joining up with the White Rose Rebellion opposing the Empire, while the other (Leon) is taken by the Empire's forces. Leon later became the right-hand of the Emperor as the Dark Knight.

Constructing a giant airship called the Dreadnought, the Empire manages to overpower all who stand in its way and capture Princess Hilda. However, the Dreadnought is brought down by the Rebels, slowing the Empire's advancement.

With Princess Hilda still in their captivity, the Empire holds a tournament at their coliseum with Hilda as the prize in order to lure out the rebels. The rebels succeed in rescuing the princess, thwarting the Empire's plans once again.

The Emperor and many of his troops are later killed by Firion's party and the Dark Knight assumes control of the empire. The party travel to Castle Palamecia within the namesake country of Palamecia to confront him, only for the Emperor to appear and reveal that he has conquered Hell, vowing to unleash the dark realm's wrath upon the world. The heroes escape as the Emperor is held off by Ricard Highwind, the last surviving Dragoon. The Emperor then summons the castle of Hell, Pandaemonium, to Earth, in the process turning the Palamecian Empire into his new satanic empire.

Many or perhaps all of the dead Palamecians were sent to Hell upon their deaths and joined their new demonic Emperor in his army of the damned. Using Hell as a base, the Palamencians assisted their Emperor in his new plans of establishing Hell on the Earth.

When Firion's party enters Hell to stop the Emperor, the Palamencians try to stop them, but were defeated. With the Dark Emperor's death, Hell's castle sank back to whence it came, taking the surviving demonic Palamencians with it and ending the empire of Hell.

In later versions of the game, the Soul of Rebirth mode is added and reveals when Firion's party was traveling into hell to stop the Dark Emperor, the other half the Emperor, Light Emperor had invaded Heaven. Under the Light Emperor's command, the fallen souls of his old soldiers had entered the Afterlife from Hell with an army of demons. The Hellish Palamecians and their devil allies tortured many of their prior victims and the survivors in the afterlife, constructed the town of Machanon, as a sanctuary from the forces of Hell.

When Minwu and the other dead allies of Firion braved the palace of heaven, Arubboth, facing many of the Emperor's followers, they encountered the Light Emperor. Seeing past the Emperor's feigned remorse in an attempt to take their souls, Minwu and his allies destroyed the Emperor's light half just as Firion destroyed his dark half. With this the Emperor was eradicated completely taking his empire with him, it is likely the spirits of his army either were destroyed too or remained imprisoned in Hell.

Palamencia's society were known for being excessively cruel and militaristic. The only shown citizens besides the Emperor, were the members of their massive military. They were known to look down at all who opposed them as "rebel scum."

Many Palamencians were disfigured and monstrous in appearance, possibly a reflection of their evil within them.

Various adherents make up the largest wing of the Empire's army. Their types are organized into Soldiers, Knights, and Wizards.

Palamecian Soldiers are armored soldiers, captains, generals and the like. They appear as stout armored military men armed with a sword and shield, their faces were a distorted visage with a fanged mouth and empty eyes. There are four known ranks of soldiers:

Palamencian Knights are knights wearing ghastly armor with a horned helmet that covers their face. They are equipped with a giant double ended Lance and a wild horse. They are the famous and iconic members of the Palamencian army:

Under Mateus, the Palamecia Empire made heavy use of monsters summoned from Hell. Several of them such as the Lamia and Gottos serving as commanders in their own right.

During the course of the game, the Palamecian Empire commands the entire southern portion of the continent. The Empire was merciless to anyone who opposed them and ruthlessly conquered all they could, even murdering entire populations for resisting.

The Imperial capital is Castle Palamecia, located at an impregnable mountain range, with a Colosseum in close proximity and surrounded by forests and deserts. The town of Bafsk, was used as the place to build the Dreadnought. The Empire ruthlessly destroys the towns of Gatrea, Altair, Poft, and Paloom with the Cyclone , while the Dragoons at Deist were wiped out when the Empire poisoned the water source on the island and then slaughters all survivors, with Ricard Highwing being the last survivor. 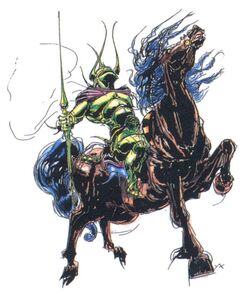 Concept artwork of the Royal Guard. 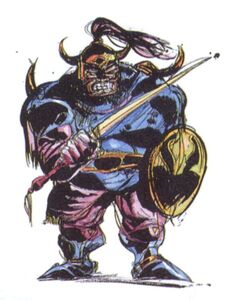 Concept artwork of the Captain 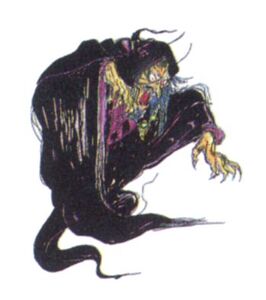 Concept artwork of the Wizard.