Disposing all Vessels with free will.

Replace the Radiance as the leader of Hallownest (succeeded).

The Pale King is a posthumous antagonist in Hollow Knight. He was once the King of Hallownest and mate of the White Lady, until suddenly vanishing alongside his White Palace following the Infection outburst. Although he had honorable intentions, he had a desire to be worshipped by all of Hallownest, including those who disapproved of his rule. His plans to replace The Radiance as the worshipped ruler of the kingdom drove the Radiance's fury to plague Hallownest, causing the conflict of events within the game.

The Pale King had a white head with a horned crown. He was small in stature and wore a gray cloak around his body.

The Pale King became the ruler of Hallownest mainly so that he could be worshipped as a godlike king. Despite this, there is no evidence that he forced anyone to follow him after granting some of the bugs sentience. The moth tribe of the Radiance willingly turned their backs on her in favor of worshipping the Pale King. While he did oppose the Soul Master of Soul Sanctum in his attempts to use Soul in order to stop the infection, the Pale King had an unethical plan of his very own. He discarded thousands of Vessels in the Abyss, with most of these Vessels ending up dying. Whether these Vessels were killed by him or died on their own is unclear.

The Pale King was born from the death of a large creature known as a Wyrm. It is said that he transformed from this being into his current form. The Godseeker claims he did this to match the bugs of Hallownest. He granted sentience to the bugs of Hallownest, who were until then under the control of the Radiance's hive mind. These bugs revered him as a god, and even the moths, who were created by the Radiance, turned to the Pale King for guidance instead. Over time, there was almost nobody who still remembered that the Radiance existed in the first place.

Despite the Pale King's plan to remove the Radiance by making everyone forget about her to sever her hive mind, her memory lingered on due to a statue of the entity at Hallownest's Crown. The Radiance grew envious over the Pale King's efforts to overthrow her as the leader of Hallownest and reacted by inflicting the dreams and minds of the bugs with a raging light, reverting them back to their mindless state, starting the Infection. The Pale King willed to go through any lengths to make his Kingdom last eternal, even if it meant committing immoral actions to ensure its perpetuation. He turned to the Void at the bottom of the Abyss below Hallownest, which appeared to have the potential to seal the Radiance. From the Void, the Pale King created Vessels, beings comprised of Void, meant to have no mind or will for the Radiance to break. However, only one Vessel was judged to be capable of containing the Infection for eternity, earning the name "The Hollow Knight". All of the remaining Vessels were discarded by the King and tossed to the bottom of the Abyss, although some managed to escape, including the Knight.

Sometime after the Infection was sealed within the Hollow Knight, the Pale King and the White Palace vanished, leaving no physical evidence of their trace. Rumors spread that he simply abandoned his people and went into hiding. Once the Knight has gathered 1,800 Essence, the Seer is able to awaken the Dream Nail, allowing them to travel through any dream. The Knight can then enter the White Palace by using the Dream Nail on the corpse of a Kingsmould in the Palace Grounds. It is unknown whether this is the actual White Palace or merely a memory of it.

At the end of the White Palace is the corpse of the Pale King, sitting on his throne. Slashing his body makes him drop his half of the Kingsoul charm, which can be combined with the other half from the White Lady. Once the Kingsoul is converted to the Void Heart, the Knight will be able to fight against the Radiance from within the mind of the Hollow Knight. 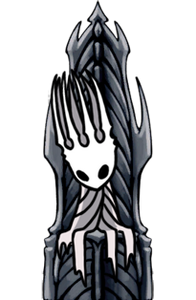 The Pale King's corpse on his throne. 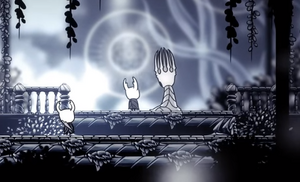 The Pale King and the Hollow Knight at the end of the Path of Pain. 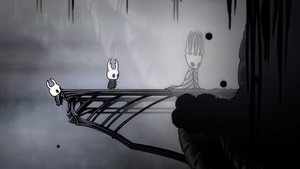 The Pale King leading the adolescent Hollow Knight out of the Abyss.
Add a photo to this gallery

Retrieved from "https://villains.fandom.com/wiki/Pale_King?oldid=4198872"
Community content is available under CC-BY-SA unless otherwise noted.