The Thing That Slumbers There

Kill the fairies who were helping Ofelia (succeeded, but only killed two).

Eat Ofelia before she escapes.
Keep anyone from feeding on his banquet (all failed).

The Pale Man is the secondary antagonist of the 2006 Spanish dark fantasy drama film Pan's Labyrinth; despite only appearing in one scene.

He is a pale skinned humanoid monster with his eyeballs in the palms of his hands, giving him a terrifying appearance.

He was portrayed by Doug Jones, who also played the Faun in the same film, Ghoul Marcus in Ouija: Origin of Evil, and and The Thin Clown in Batman Returns.

There were good reasons why the fairies warned Ofelia about the Pale Man, as shown on the walls of the creature's lair, there are paintings of the Pale Man eating live children one by one. The children in the paintings are obviously and unsuccessfully begging for mercy, indicating that Pale Man had no trace of humanity.

And in a corner of Pale Man's lair was a large pile of children's clothing and shoes, which indicates that he does eat his victims entirely, as there are no bones or remains left. Pale Man likely did the paintings himself, keeping them and the clothes of his victims as trophies.

During the time the story takes place it is in the post–Civil War Spain in 1944 (after Francisco Franco has come into power). When most people were boiling roots and "literally making almost stone soup for dinner - nobody had food".

During Ofelia's quest to prove herself worthy that she hadn't turned into an ordinary human, she was sent to the lair of the legendary creature known as the "Pale Man", who is a vile, hideous, and rebarbative humanoid monster with pale elastic skin and has an immense appetite for small defenseless children.

Ofelia must successfully retrieve a dagger which was kept locked in Pale Man's lair (the first task was getting the key). The Faun warned her not to eat anything from the luxurious banquet served at the sleeping Pale Man's table, and also let her take his pet fairies with her to serve as a guide during this journey.

When Ofelia visits Pale Man, he is sleeping in a chair at his dining table next to a warm crackling fireplace. Once there, Ofelia quickly found the dagger with some help from the fairies, but when she was about to leave, she just couldn't resist temptation and ate two juicy plump grapes from the Pale Man's banquet, in spite of the fairies reminding her not to do so.

This, as expected, woke the Pale Man from his deep silent slumber, who quickly picked up his eyeballs off a platter on the table and placed them into the eye sockets in the palm of his claw-like hands, to see and immediately set off to find and eat Ofelia.

The girl watched in horror as Pale Man was attacked by the three fairies accompanying her, two of whom he grabbed and mercilessly devoured. As Ofelia rushed to escape, Pale Man (though not able to walk very fast) was close behind. The exit closed just seconds before Ofelia was able to reach it, but she quickly drew another one with a piece of chalk that she was carrying and both her and the remaining fairy managed to escape just in the nick of time, leaving the Pale Man behind to presumably go back into slumber at his table. 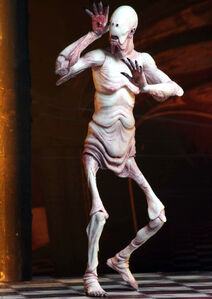 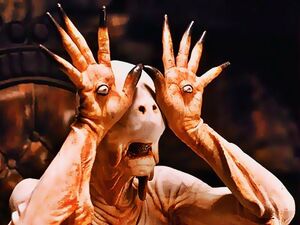 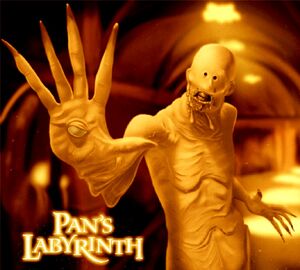 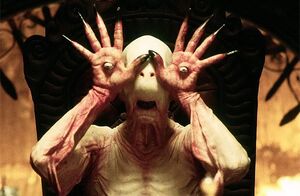 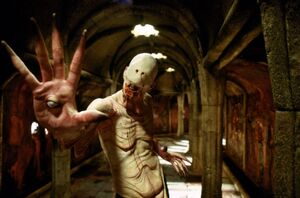 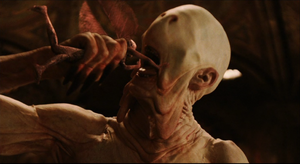 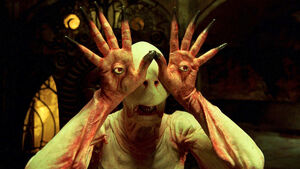 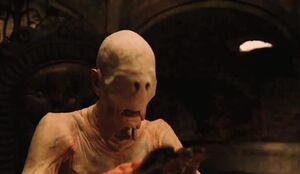 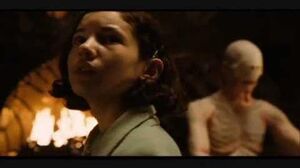