The Spatial Pokémon
Master of Space

Member of the Creation trio

Destroy the world after being controlled by Cyrus (formerly).

Spacial Dragon
Palkia is a Water/Dragon-type Pokémon and the mascot of Pokémon Pearl. It does not evolve into or from another Pokémon. It has a signature move called Spatial Rend. It has had various antagonistic roles, primarily in the tenth Pokémon movie The Rise of Darkrai, appearing as the main antagonist. Much like the other members of the Creation Trio, Palkia represents a fundamental aspect of the universe, representing space.

Palkia is a white and purple reptilian Legendary Pokémon with one orange gem on each shoulder. It has an underbite, with two dagger-like appendages protruding from its chin.

The Rise of Darkrai

Dialga and Palkia encounter one another in the Unown Dimension and clash. Injured by Dialga's Roar of Time, Palkia flees to Alamos Town, causing the city and its residents to find themselves trapped within another dimension, slowly disintegrating due to the presence of Palkia.

Then Dialga arrives to fight Palkia, causing the dimension to shrink faster with every blow the two deal. Darkrai attempts to stop the two, only for them to blast and seemingly kill him as he fades away from the dimension. Just before the two deal the finishing blow, Ash and Dawn use the bells of the Space-Time Towers to play "Oración", soothing Dialga and Palkia. While Dialga returns to its home dimension, Palkia shows sorrow for getting Alamos Town involved and restores it by sending it back to the correct dimension.

Palkia then plays a heroic role in Arceus and the Jewel of Life where it protects Michina Town from Arceus.

Palkia serves as an anti-villain in the Post Story, where he is manipulated by Cresselia (really Darkrai in disguise) into killing the player and their partner for causing distortions in space for returning from the future. He takes them to his dimension in Spacial Rift to finish them off, but the two defeat him. Cresselia appears and enters Palkia's dream, dragging the player and the partner in with her. Cresselia orders Palkia to finish the two off, but before he can, the real Cresselia appears and exposes Darkrai from the dream. Palkia apologizes for the misunderstanding and returns the party back to their home dimension.

After the party defeats Darkrai in the Dark Crater, just as he escapes within a dimensional hole, Palkia arrives and smashes the portal with Darkrai inside it. Later, if the player returns to Spacial Rift and defeats Palkia again, he will request to join the team.

In Super Smash Bros. Ultimate, Palkia also serves as a primary shield-type spirit. Its Spirit Battle is against Mewtwo on Spear Pillar where Palkia appears to alter the controls by reversing the left and right directions. 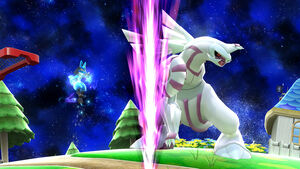 Palkia using Spatial Rend.
Add a photo to this gallery

Retrieved from "https://villains.fandom.com/wiki/Palkia?oldid=4036028"
Community content is available under CC-BY-SA unless otherwise noted.