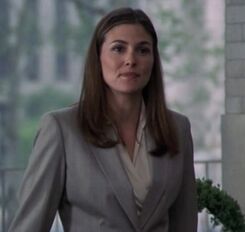 Pam Adler is the main antagonist of the Law & Order SVU episode "Ridicule". She is a ruthless attorney who leads two other women in gang-raping a male stripper.

She was portrayed by Paige Turco.

Pam Adler was a skilled defence attorney, who was involved in the "People vs. Hightower" case, during which she beat ADA Alexandra Cabot. She also attended her friend Sydney Green's bachelorette party, during which Adler, Green, and Amelia Chase tied a male stripper, Peter Smith, to a bed and gang-raped him. This lead to Smith filing a civil lawsuit against them, but was unable to sufficiently prove his case. In spite of this, Green attempted to settle the case, at which point Adler and Chase broke into her apartment, hanged her and framed it as a case of auto-erotic asphyxiation.

During the investigation, Adler was interviewed by Detectives Olivia Benson and Elliot Stabler, telling them that Green was depressed about her upcoming divorce. Chase also told them that she was into autoerotic asphyxiation and they discovered that her husband Andrew would have received $50,000 if she died while they were married. However, when Andrew was interviewed, he told them that he and his wife were divorcing because he found out that she and her friends raped a male stripper, leading to Smith being suspected.

Smith was investigated, but was cleared due to his alibi. As a result, Green's death was ruled an accidental suicide through auto-erotic asphyxiation, but the Special Victims Unit began investigating Smith's rape. Adler and Chase were both arrested on suspicion of rape, and identified in a lineup. Adler requested that the charges be dropped, as American law is unconstitutional when it comes to male on female rape, but was rejected.

Adler, representing herself, cross-examined Smith, exposing the fact that Smith filed a civil lawsuit and didn't tell the police, with Smith claiming that he didn't mention it because he could be suspected of killing Green. He also explained that Green was discussing a settlement with him, which Adler had a copy of, causing the SVU to suspect Adler and Chase of killing Green, as the settlement involved telling Smith the identities of his other two rapists. As a result, they investigated the scene again, and found Amelia Chase's fingerprints at the scene.

When Chase was arrested, she agreed to plead guilty to Smith's rape and Green's murder and testify against Adler in return for a reduced sentence. Despite Chase's testimony, Adler was acquitted of all charges relating to Smith's rape with the exception of third degree assault, only to immediately be arrested for Green's murder while leaving the courtroom. As she was arrested, she insisted that she would get off, but ultimately accepted a plea deal (off-screen) and was sentenced to 16 years in prison and permanently disbarred.