Agent of the Hidden One
Servant of the Gods (formerly)

Summon the Hidden One on earth and likely to bring apocalypse (formerly).

Use the witnesses to reconstruct her box to defeat the Hidden One (succeeded).
Become a new god (failed).

Pandora is a regular character recently appears in the TV series Sleepy Hollow, serving as the secondary antagonist of the third season. She is also the second of the Seven Disasters which the Witnesses must face after Moloch.

She is a mysterious new presence appears secretly at Sleepy Hollow, seeking for two Witnesses' assistance for an unknown purpose. She usually appears in the guise of a beautiful woman, but at rare times, she displays features that recall a snake or crocodile. She also holds a mysterious magic box, which its complete usage is currently in mystery.

She is played by Shannyn Sossamon, who also voiced Jade Nguyen in Hitman: Absolution.

Pandora's motives are in mystery, and her interests in the Two Witnesses (Abbie Mills and Ichabod Crane) are equally mysterious, for she never directly attacks them but rather sends her minions to hurt some innocent victims and see the results of how the Witnesses deal with the threat. The seemingly random monsters she unleashes on Sleepy Hollow serve one single goal - opening a gate to the underworld to rescue her divine husband, the Hidden One. She even thanks Ichabod for the witnesses killing all threats, and thus tidying up after her.

As far as we know, she is married with the Hidden One sometimes after her father sold her to slavery and is determined to raise him from Hell. In a fit of revenge, she convinced her master to feed her father to his lion. All the while she causes malevolent mischief, she seems to be cultivating a dark tree that blooms black roses, and may not even be human herself.

Nine months after Henry Parrish and Katrina Crane's death, a mysterious woman named Pandora encounters the Headless Horseman and seals him away in her box, and is granted the power of a demon that causes fear in its victims before killing them in exchange.

Ichabod reaches out to Abbie who is now an agent with the FBI when he is arrested and detained for smuggling a tablet from his travels into the country. When Abbie arrives to have him released, he shows her Katrina's pendant that is linked to Abraham's soul and tells her that something has happened to him, and that the second tribulation is about to begin.

In "Whispers in the Dark",

In "Blood and Fear", Pandora gave a man a knife that causes him to act on his darker impulses and murder those he hates, turning him into Jack the Ripper. Witnessing one of the bodies, Ichabod recalls a similar case when he was a boy at Eton College in 1763, and realizes that the killer they are tracking was also Jack the Ripper. Even though the killer was defeated by Ichabod, Pandora apparently takes Abbie's moment of fear that Ichabod will die and use it to make a flower bloom on a mysterious tree.

In "Dead Man tell No Tale", following the events of the Bones episode "The Resurrection in the Remains, Pandora reanimates William Howe as an undead being while his remains are being sent to Sleepy Hollow from Washington and instructs Howe to reanimate his old soldiers as an undead army, Crane and Abbie learn that he can only be defeated by a secret hidden in his original tomb.

Using fragments of Howe's skeleton, they call in a favor from Special Agent Seeley Booth and Doctor Temperance "Bones" Brennan (both main characters from Bones) to analyze the fragments, discovering the tomb underneath the Capitol Building, originally designed for George Washington's use. Learning that the creatures are vulnerable to Greek fire, they lure Howe's army underneath Sleepy Hollow and destroy them in the sewers with minimal collateral damage.

Although aware of Pandora's role in Howe's resurrection, Ichabod and Abbie are unaware that another flower has bloomed on her tree.

In "This Red Lady from Caribee", Pandora's new plan involves a creature that stings its targets and causes them to succumb to paranoia before the infection kills them, one of which attacks Agent Reynolds. Finding records of an encounter between Betsy Ross and the creature, Crane and Abbie are able to track the beast's lair and burn it down, but are taken by surprise when they discover Pandora's tree, which she enters as the sixth blossom blooms.

In "Novus Ordo Seclorum", learning that Pandora's summoned ally is an ancient Sumerian god known only as 'the Hidden One', Crane recalls a tale in the books in the armory about the death of Paul Revere's nephew under similar circumstances. Realizing that the Shard of Anubis contained and hid the power that is now within Jenny, Crane is able to reforge the shard based on his memory of witnessing its original creation.

When Attius Nevins offers to talk to Abbie about where she might find Jenny, he is killed by Pandora, who offers Abbie and Crane a place in the new world that she and her 'husband' will create once they have 'cleansed' the current one.

While Crane uses Nevins' book to distract Pandora by attempting to summon something from her Box, Abbie drains the Shard's power into the new shard, but, believing that it is the only way to save the world and her sister, she then takes the new Shard into the Hell portal under Pandora's tree. The resulting energy release apparently destroys Pandora's Box, leaving Abbie's fate unclear. 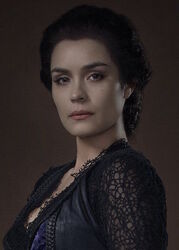 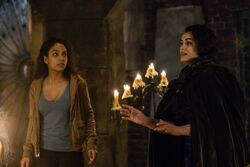 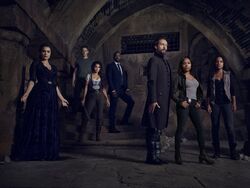 Retrieved from "https://villains.fandom.com/wiki/Pandora_(Sleepy_Hollow)?oldid=4133055"
Community content is available under CC-BY-SA unless otherwise noted.