To bring peace in all of China using her magic. (formerly)

To sacrifice Lu Kang and brainwash all of China. (half failed, half briefly succeeded for a short period of time)

She was part of a group of mystic using magic to create peace, however, the people of China that time feared their magic and was imprisoned by the Emperor. She was the only one to escape, and then for centuries, tried perfecting the magic she will use to bring her revenge.

She was voiced by Amy Hill.

Pang Bing is a selfish and arrogant Siamese cat, wanting power all for her self. While she claims she is tragic, all the people who wronged her would've already died. She is intelligent also, using Master Shifu as the typical "escaped the villain" cliché to lure Po, knowing she shouldn't waste time with Emperor Lu Kang, as well as brainwashing Duke Zhihui to be a very suspicious fellow and make him the figurehead of the plot against the Emperor.

Many centuries ago, Pang Bing was part of a peaceful group of mystics, wanting to use their magic to spread peace among China. However, the people of China were afraid of their powers and shunned them. When they appealed to the Emperor in that time, he had them imprisoned in his dungeon. Only Pang Bing managed to escape and for centuries practiced the magic she needed to have her revenge.

She then has Duke Zhihui and few of the Imperial Guards brainwashed to her control, and acted as the assistant to Zhihui, the Imperial advisor. She made Zhihui the figure head of the plot against the Emperor and was waiting for the eclipse to brainwash everyone in China. After the most recent Emperor retired, he handed the throne over to his dimwitted grandson, Lu Kang. While disappointed. While disappointed on how dimwitted Lu Kang is, focusing only on one thought at a time, she knew it was working in her favour as she was planning to sacrifice him to make her magic brainwash everyone in China. She would then go to the Jade Palace with her men and the Emperor.

Pang Bing first meets Po when they arrive at the Jade Palace. Pang Bing greeted frailly Po but to make Zhihui suspicious, she has him beat her for speaking hen she wasn't supposed to be. When Lu Kang chose Po as the Imperial Head of Security, she "befriends" Po, trying to make him earn her trust. So, she made everyone utterly mean to Po, except Lu Kang. Po then speaks to Pang Bing, telling how he appreciates that she was the only person kind to him, to which she thanks.

She then has her pawns discuss their plans to kill the Emperor, to which Po overhears. She then has Zhihui frame Po as the traitor and have them chase him and Lu Kang. While they lost sight of them, Pang Bing used this as an opportunity to neutralize the threat of Shifu and the Furious Five. She then has her men attack the place. She has Zhihui attack Po, to which she "helps" to trick Po into revealing where Lu was hiding, Pang Bing revealed her true nature and told her backstory, to which Po retaliated on how everyone who wronged her would've already died. She then orders Po and Lu's arrest. While they managed to escape, Pang Bing won as she has the Furious Five and Shifu and started the preparations for her ritual back at the Capital and had her prisoners, who tried escaping, brainwashed.

However, Po and Lu returned with a band of unlikely allies: The Brotherhood of Malfeasance (consisting of Fung & Gahri, Temutai, Hundun, Tong Fo and Taotie) who were released from Chorh-Gom Prison. She then used Shifu to deceive them into think Shifu is the only escapee and lured Po and everyone else to be captured. When she catches Po, she gives the Brotherhood a chance to escape or be brainwashed to which they will help Po. They took the opportunity, unaware they will anyway won't escape Pang Bing's magic, and she wasn't aware though they were going to help Po by using one of Taotie's machine. She then casts the spell on Po, who only focused on Shifu's riddle to escape the magic and pretend to be brainwashed since Pang Bing told Lu Kang was immune since he focuses only at one thought at a time.

During the ceremony, she has Lu Kang surrounded by fire and near explosives, while everyone cheers, unaware what is going on. Lu begs for help, but she tells him that they think it is a normal ceremony and won't help. Po then disrupts the ceremony and reveals how he managed to escape her magic. Then the Brotherhood came to help Po. However, none of the unexpected resistance was stopping Pang Bing succeeding in taking control of everyone in China, but Po and Lu. She then has everyone attack Po so he can be brainwashed, but Lu Kang indirectly helped Po answer Shifu's ritual and managed to disrupt the ritual and freeing everyone. With her powers diminished and scheme thwarted, she was taken away to prison, ending her threat. 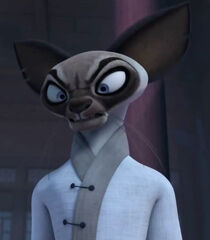