Ability to shatter anything with his staff.

To stop the approach of the seventh Toa.

Panrahk is a villain in the animated direct-to-video movie Bionicle Mask of Light.  He is one of the six Rahkshi released by the Makuta to stop the Matorans Takua and Jaller fron finding the seventh Toa.

Panrahk was released by the Makuta along with Lerahk and Guurahk to stop the approach of the seventh Toa. He and his fellow Rahkshi attacked Ta-Koro in search of the Kanohi Avohkii (the Mask of Light). He was one of the first Rahkshi that Toa Tahu fought and seemed to be the leader. Panrahk then escapes from Ta-Koro by using his staff to fly.

Panrahk later returns with Lerahk and Guurahk at Ko-Koro and is then frozen in a lake shortly after by Toa Kopaka.

However, the ice did not hold him and the other Rahkshi for long and he returns to fight the Toa. However, he, Lerahk, and Guurahk end up being frozen in a mix of elements created by the Toa. 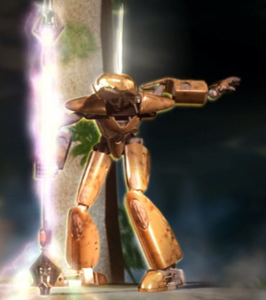 Panrahk in BIONICLE Mask of Light: The Movie