Carrying out the will of the OverLord.

Monster
Pantheras Luteus is a minor antagonist of Kamen Rider Agito and a Jaguar Lord. He first appeared in the first episode as the main antagonist.

Pantheras Luteus was sent to kill the Saeki Family and began targeting them one by one. After killing the Saeki wife, Luteus was confronted by Makoto Hikawa but did not go after him as he was not one of his targets. Makoto then became G3 and fought the Lord until Agito arrived and destroyed it with a Rider Kick.

In the alternate future where Shocker achieved world dominion after defeating the Double Riders with their new kaijin Shocker Greeed, Pantheras Luteus was one of the members of future villain groups who instead served Shocker in the timeline.

Luteus first appeared at the side of El of the Water as he represented the Lords at the meeting of the Shocker Council. Later on, Luteus was part of the group of monsters that fought the Kamen Riders as more of them began to appear. He was destroyed alongside Cetos Orcinas by Kamen Rider Agito.

Pantheras Luteus was among the revived monsters who were part of the resurgent Dai-Shocker led once again by Tsukasa Kadoya that formed to oppose Dai-Zangyack in their quest to eliminate all the Kamen Riders by eliminating all of the Super Sentai. After Dai-Shocker and Dai-Zangyack overthrew their respective leaders and revealed their alliance, Pantheras Luteus was part of the massive Dai-Shocker and Dai-Zangyack army that fought the combined forces of the Kamen Riders and Super Sentai. During the battle he was seen fighting Blue3, MegaPink, Blue Dolphin, and Big One.

Pantheras Luteus was one of the monsters who appeared in the World within the Magic Stone. It is destroyed alongside a Rhinoceros Beetle Orphnoch by Kabuto's Rider Kick. 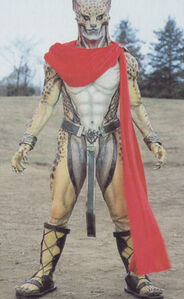 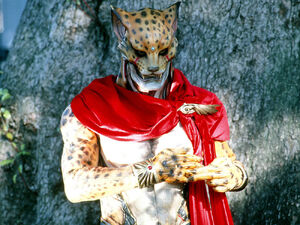 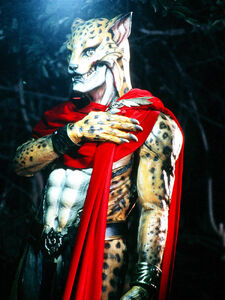 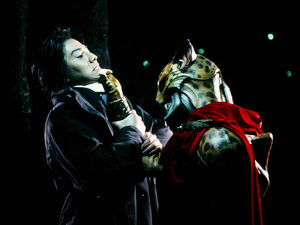 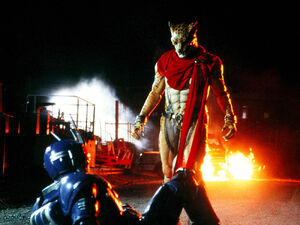