Henry Bear, better known as Papa Bear, is a supporting antagonist from the Looney Tunes franchise. He is the husband of Mama Bear and the abusive father of Junior Bear, as well as an adversary of Bugs Bunny.

Bugs Bunny and the Three Bears

Henry Bear first appeared in the 1944 theatrical animated short Bugs Bunny and the Three Bears. In the short, he comes up with the idea for he, Mama, and Junior to recreate the story of "Goldilocks and the Three Bears," but kill Goldilocks and eat her when she comes. However, due to not having any porridge, they substitute it with carrot soup, which instead attracts Bugs Bunny.

Papa beats up Junior repeatedly when he messes up their attempts to attack. Bugs manages to seduce Mama Bear, who saves him from Papa and Junior attempting to kill him. However, it backfires, as now Mama is violently obsessed with Bugs and chases him down.

In the 1948 short What's Brewin', Bruin?, Papa, Mama, and Junior all prepare for hibernation. However, Papa is constantly woken up by annoyances such as Mama snoring, Junior having nightmares, a leak, and sneezing. He finally gets so fed up that he ties Mama and Junior to their beds just as winter ends, though he goes to sleep anyway.

In the 1949 short The Bee-Deviled Bruin, Papa beats up Junior for eating all of their honey. Papa and Junior go out to get more honey by raiding a beehive, but Junior's incompetence constantly makes them fail and results in Papa repeatedly punching his son. When he admits defeat, Mama tells him that she tried to explain that they had more honey. In his rage and confusion, Papa smashes all of the honey jars.

In the 1949 short Bear Feat, Papa once again attacks Junior for annoying him, smacking his face into a bowl of oatmeal while he cries. Papa then reads a newspaper ad for trick bears for the circus, and demands they practice for the job. When Junior and Mama begin practicing with him, he takes a swing at Mama before kicking Junior so hard he falls over. The bears then try practicing circus tricks, which always result in Papa getting injured. After Junior screws up one too many times, Papa shoves Junior's head through a wooden wall and writes "Hit my baby son - 3 shots for 5¢", inviting people to beat up Junior while Pap throws baseballs at him. After another stunt gone wrong, Papa is launched so high in the air that he does not come back down for a whole day. After finally giving up, Mama reveals that the newspaper he was reading was an old one. Enraged and saddened, Papa attempts suicide by jumping off of a cliff, but Junior saves him. Papa, furious that his suicide was botched, punches Junior one more time.

A Bear for Punishment

In the 1951 short A Bear for Punishment, Mama and Junior celebrate Father's Day by doing favors for Papa, much to his anger as they usually result in him getting hurt.

Papa Bear makes a brief cameo appearance in the final scene of Who Framed Roger Rabbit.

Papa, along with Mama and Junior, make a few appearances in Tiny Toon Adventures, such as in a recreation of "Goldilocks and the Three Bears" with Elmyra Duff in the role of Goldilocks.

Papa and Junior are tourists in Paris France, and watch as protagonist DJ loses his pants to a rocket. DJ steals Papa's trousers and uses them to catch a villain.

Papa, Junior, and Mama make brief appearances in the episode "Ridiculous Journey", where they are traveling to visit the Grand Canyon. 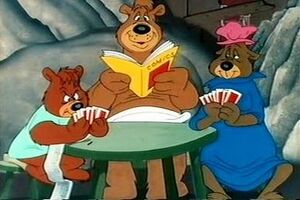 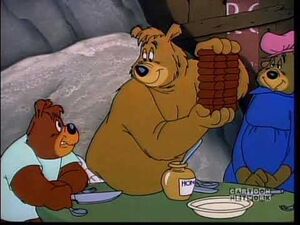 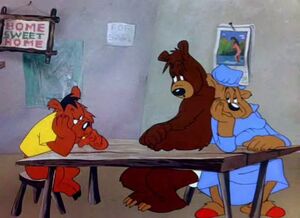 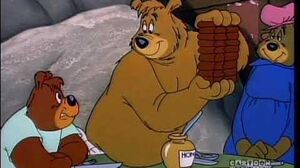