Spirit of the Dead

Collect as many souls as possible.

He was portrayed by Lance Reddick.

Papa Legba's role in American Horror Story is mainly to acquire as many souls as he can. He is based off of the character from Haitian Voodoo, who is also called Papa Legba.

He shows several uses of powers in the show:

Being the gatekeeper of the spirit world, Papa Legba seems to be always interested in acquiring souls, regardless of who they're from. He was willing to make a deal with Fiona Goode for her soul despite her being vain and murderous, but revoked the deal when he found that she, 'had no soul'. Yet once he successfully makes a deal for someone's soul, Papa Legba delights in tormenting his victims into sacrificing innocent souls for him.

Despite his often antagonistic and somewhat sadistic personality; Papa Legba is an honest individual. He explained clearly and honestly his terms of granting immortality to Fiona when she asked for details. Furthermore he meticulously explained the dynamics of Marie and Delphine's immortality to Queenie while also praising her for her sharp mind and powerful magic in being able to enter and exit the spirit world successfully. 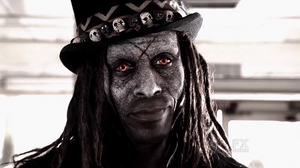 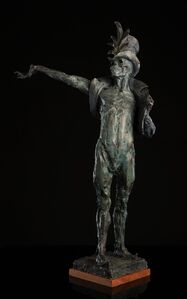