Para Para is one of the Amazon Quartet who serves Zirconia and Queen Nehelenia. She is the youngest of the Amazon Quartet, and very childish. She is the ball rider of the Dark Moon Circus and attacks by walking on a giant ball to flatten her enemies. She also likes to play with dolls, but can be quite violent with them, yanking the head off a doll who "had a toothache". She is the only one besides Jun Jun to send a male Remless (Mr. Magic Pierrot, though her other two followers are female). She possesses a blue orb.

When Zirconia arranged the assassination of the Amazon Trio, Para Para sent Mr. Magic Pierrot, who succeeded in killing Hawk's Eye, and (indirectly) Tiger's Eye and Fisheye, but was killed by Sailor Moon, and the Amazon Trio were revived by Pegasus.

Para Para created a Rini doll to switch with Rini when Zirconia and Queen Nehelenia had her captured, as the Amazon Quartet wanted to ride Pegasus and take his horn. When Zirconia found out, he trapped them in another dimension inside mirrors, and they began to question if they were on the right side. Zirconia later teleported them to the place where he fought the Sailor Scouts and drained their power to increase his power, but this was stopped when Para Para, along with the others, smashed her orb on the ground, releasing her from Nehelenia's power and giving up eternal childhood.

The Amazon Quartet helped Sailor Moon fight Queen Nehelenia by switching the golden crystal (which was in Nehelenia's possession) with a pineapple. After Nehelenia was defeated and left Earth, the Amazon Quartet decided to leave somewhere, saying they might see the Sailor Scouts again.

She was voiced by Machiko Toyoshima in the classic anime who is replace Sumire Morohoshi in movie in the Japanese version, and by Jennifer Gould in CWi English Dub, and Xanthe Huynh in Viz Media English Dub in the English version. 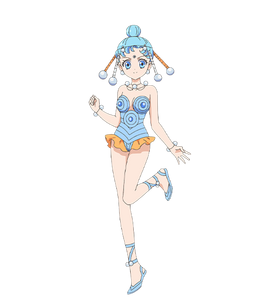