Former co-founder and member of the “World Below”

Studying and quoting the classics of literature

Scheming sinister plans for his revenge

Taking over the "World Below"

Trying to kill Vincent, Catherine and ‘Father'
Threatening to expose the "World Below"
Trying to drive Vincent mad

Paracelsus, born John Pater, is, so to speak, the recurring main antagonist during the first and second seasons of the 1987 TV series The Beauty and the Beast.

He was portrayed by the late Tony Jay, who played the voices of Judge Claude Frollo from Disney's The Hunchback of Notre Dame, Shere Khan from Disney's The Jungle Book 2 and TaleSpin, and Megabyte from ReBoot.

John "Paracelsus" Pater was one of the founders of the World Below (a utopian community without crime and suffering, living in a secret system of tunnels and caverns beneath New York City) alongside Jacob “Father” Wells and a highly respected savant and universal-genius with interests in philosophy, science and even magic.

It was him who originally discovered more than half of the tunnels and vaults the inhabitants still use and live in. He also developed the code-language the community still uses to communicate through the widespread pipe-system via secret knocks.

But after some time he developed a disturbing lust for power and when he forcefully tried to take over the World Below he was banished.

Filled with hate and bitterness he called himself Paracelsus after his role-model, the legendary medieval alchemist, and lurked in the shadows for a chance to take revenge on those who cast him out.

The World Below becomes aware of him again when a dangerous drug he developed costs the lives of dozens of New Yorkers. When Vincent tries to stop his madness his lair bursts into flames as a result of a fight. The source of the drug gets destroyed and Paracelsus is seemingly killed in the fire.

But he survived with severe facial burns which he hides beneath a half-mask of pure gold and kidnaps Catherine and sets a trap for Vincent. When he arrives at Paracelsus' new hideout in purgatorial depths of the World Below, he claims to know much more about Vincent's origin than Father has told him. When Paracelsus tries to burn Catherine at a stake Vincent safes the day but the madman escapes in the darkness.

He strikes again at the World Below's most important holiday when he tries to kill Father with a bomb. Here he demonstrates his astonishing talent for disguising and imitating voices alongside a shocking and sadistic brutality. He almost kills Narcissa the nearly bling fortune-teller and beheads one of the community's ‘world-above'allies to take his place during the festivities.

Paracelsus' final plot is to make Vincent ‘his son' and drive him mad by unleashing his inner beast. During this final confrontation two versions of Vincent's origin are revealed:

In Paracelsus version Vincent is actually his biological son as well as a result of biological experiments he implemented to impregnate his infertile wife Anna. Due to this story Vincent wasn't born the usual way but with his claws ripped his way out of his mother's flesh.

Later it is revealed that the truth is that it was Anna who found Vincent as a baby near St. Vincent's Hospital. She and John always dreamt of starting a family but weren't able to have children of their own, so they decided to raise him as their son. But Anna was worried about the baby because about that time John began to lose himself in his growing hunger for power. He was more and more obsessed with Vincent as ‘his son and heir of his future kingdom' and so she took the boy and gave him to Father to care for him. For this ‘treason' John murdered his wife with poisoned wine before he tried to take over control which was the ultimate reason for his banishment from the community.

It is unclear how far Paracelsus in his insanity believed the tale of the creature, that ripped his mother's body apart to be born, himself but he was successful with unleashing Vincent's beastly inner demons. After this terrible reveal Vincent suffers a breakdown. He loses control and wounds him mortally.

Paracelsus appears as a gaunt man in his late fifties or early sixties with thin greyish hair, a beard and dark sharp looking eyes. Most of the time he wears a black 'Mao-style' suit with a stand-up collar and a narrow white seam at the jacket's front, black boots and on his left hand he always wears a black leather glove. Occasionally he is also seen with a common grey suit, a white shirt and a gold-coloured tie.
During the character-development he suffered severe burns on the left side of his face he hides beneath a roughly welded golden half-mask.

Since not even the cleverest and most evil genius is able to fulfil his plans all by himself even Paracelsus needs allies from time to time:

Paracelsus: "So they call you 'Father' now... I heared it through the pipes. Ingenious idea communicating on those pipes."
Father: "Yes, it was ingenious... of you, John."
...
Paracelsus: "We could have been gods, you and I."

Vincent: "I don't want to harm you but you must leave this place."
Paracelsus: "Leave? By whose judgement?"
Vincent: "Mine."
Paracelsus: "What does Falstaff say – ‘The better part of valour is discretion'!"

To Reign in Hell

Paracelsus: "Better to reign in Hell than serve in Heaven. Ay, Vincent?"
Vincent turning towards him: "Paracelsus!"
Paracelsus sneering: "Milton, actually."
…
Paracelsus: "You were betrayed, Vincent – you call him ‘Father' but it was I who found you – wrapped in rags, starving… It was I who named you Vincent… And it was I who cared for you in all those months. Even ‘Father' didn't think that you would live but I – I fed you and bathed you – and you did live… Don't you see, Vincent? He wouldn't let me take you – when I was exiled, he made me leave you behind! I loved you – you were mine… You don't believe me?"
Vincent "How could you help me believe? That you loved – and are now capable of this?!"
Paracelsus: "Now is the time for retribution!"
Vincent: "Then you never really knew love."

Tamara: "It is all so long ago. What has their world to do with you?"
Paracelsus: "Their world is MINE by right! I made them, I taught them... But they have lessons yet to learn."

Paracelsus: "It is 35 years ago that I gave Jacob this chessmen as a token of my affection – of our friendship."
Tamara: "Friendship is a wonderful thing – The arming device?"
Paracelsus: "On the lid. Press the rose and the next time the box is opened – checkmate."

Narcissa recoiling: "No! You are not Vincent - you are the Evil One!"
Paracelsus: "Down here is neither good nor evil, only strong and weak!" … "There are no friends in the darkness old woman. In the dark all men are enemies."

Father: "John!"
Paracelsus: "Paracelsus! John is dead – killed by you, Jacob!"
…
Father: "What happened to you, John? You were a good man once – my friend."
Paracelsus: "Spare me the homilies, Jacob! These poor deluded fools may not know what happened but you and I – we remember, don't we?!"
Father: "We – remember differently, John."

Paracelsus showing his scars: "He did this."
Spirko: "Vincent."
Paracelsus: "Yes – he left me to burn in the fire."
…
Paracelsus: "He's beyond men. In his own right he is a god. A warrior. But you see, he tries to be a man and in that denies his own greatness. He's a source of primal rage and secret lurking instinct. He's a killer – That is his greatness! That is his nature… But if he'd have killed you tonight, Mr. Spirko, as I hoped – If he killed an innocent man, I believe he would finally understood and shed the false skin of his humanity… He would become what I always dreamed for him – He would have become my son!"

Father: "What is this all about?"
Paracelsus: "What it always has been about – you, me, the child!"
…
Paracelsus: "How do you propose to stop me, old friend? -Father pulling a revolver and aiming at him.- So this is what it's come to in the end, ay? All your fine talk of love and turning the other cheek?!"
…
Paracelsus: "It's time for the boy to claim his birth-right!"

Paracelsus dying: "At last you are my son…"

Paracelsus during his first appearance in "The Alchemist" 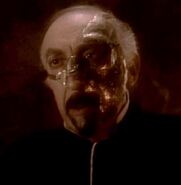 Paracelsus with his golden half-mask in "To Reign in Hell" 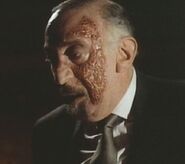 Paracelsus with revealed scars in "What Rough Beast" 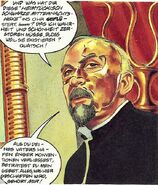 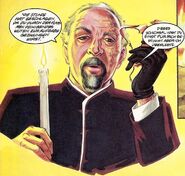 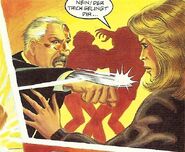 Paracelsus and Vincent - Publicity-Still of Tony Jay and Ron Perlman 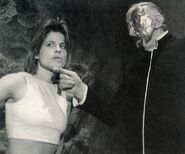 Paracelsus and Catherine - Publicity-Still of Tony Jay and Linda Hamilton
Add a photo to this gallery
Retrieved from "https://villains.fandom.com/wiki/Paracelsus?oldid=3466555"
Community content is available under CC-BY-SA unless otherwise noted.