To stay rich by controlling every kid show and their main hosts (failed).

To get rid of Smoochy the Rhino.

The Parade of Hope is a corrupt charity organization that are the enemies of Sheldon Mopes (Smoochy the Rhino) in Death to Smoochy.

The Parade of Hope started as a charty organization back in 1964 and they have sponsored every ice shows performed by the Kidnet network. But they also ordered Kidnet's TV show hosts to be in those ice shows in order to get more money through banquets and benefits. They'd never take no for an answer. If anyone crosses Merv or don't do what they are told to do such as doing the Ice Show, Merv will have that person pay the terrible price such as horrible accidents, body injuries or the Parade of Hope's personal favorite, shot and neck snapped like a twig which is the corrupt charity group's calling card.

After Rainbow Randolph got arrested by the FBI for bribery, the Parade of Hope including the organization's leader Merv Green were looking for another children's TV show host to replace him and earned them more money.

Mopes becomes enraged to learn that Burke signed him up to star in a Smoochy ice show; he feels that the event will exploit children. Burke and Merv Green, the heads of the corrupt charity running the ice show, unsuccessfully warn Mopes from backing out of the event. Soon afterward, Smoochy's show was halted and later restored after Rainbow Randolph framed Sheldon for being at an unlawful neo-Nazi assembly.

Smoochy commits to the ice show. He decides that all proceeds will be split in half and each half will go to both the drug rehab clinic he used to work at (which was closed due to lack of funding) and child literacy enhancement programs; the kids will be given free souvenirs and healthful snacks. Because that means that the Parade of Hope won't see any of that money, Burke and Green retaliate by plotting to kill Mopes and hire a new host who will cooperate with their profit skimming. However, Green and his men accidentally kill Spinner in his Moochy costume; Merv and his bodyguards are discovered, captured, and killed by Cotter. Later, after Buggy Ding Dong fails to kill Smoochy, Burke and Stokes were put at Cotter's mercy while Sheldon and Nora went on with their lives This became the Parade of Hope's last march. 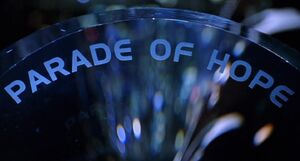 The official logo of the Parade of Hope charity organization.