NOTE: This article is about the incarnation of the Parademons from the DC Extended Universe. The mainstream version can be found here: Parademons.

Devouring people who are afraid.

Conquer the Earth for Steppenwolf and transform into Apokolips (failed).

Parademons are an antagonistic faction in the DC Extended Universe, first making a cameo appearance in Batman v Superman: Dawn of Justice. They are an invasion force working for Steppenwolf and the secondary antagonists of Justice League.

Bruce Wayne has a nightmarish hallucination of an apocalyptic future. In it, Gotham has been laid waste to and in a scorched wasteland before the city, a huge Omega symbol is burnt into the ground. In a charge of scenery, Batman witnesses a group of people being slaughtered by an unknown military force as suddenly, winged humanoid beasts attack the group. As Batman is fighting the soldiers and is slowly overwhelmed, the Parademons land nearby and watch until the soldiers press Batman to the floor, at which point one of the Parademons knocks him out with a strong blow to the head. It seems that in this vision, they are allied with Superman because they then deliver Wayne to Superman himself. The vision is one of the reasons for Batman's feud with Superman.

After Batman has put his dispute with Superman aside and the two have joined sides to defeat Lex Luthor and Doomsday, Bruce - out of fear of the nightmare and the invasion coming true - starts assemble a group of meta-humans to defend Earth. Thus, the Parademons are indirectly responsible for the beginning of the group that will later be known as the Justice League.

A swarm of Parademons invaded Gotham, with Batman defeating them. They are the servants of Steppenwolf, who plan to destroy the Earth for his nephew, Darkseid. Multiple Parademons are sent to Earth to scout the planet before Steppenwolf's arrival. They assisted him in retrieving the Mother Boxes from Themyscira and Silas Stone, and occasionally battle the Justice League. At the end of the final battle, when Steppenwolf was defeated and felt fear, the Parademons, who are attracted to scared prey, attacked him as he was dragged through the portal back to Apokolips. It is currently unknown if they successfully killed him.

A Parademon knocks out Batman.

A human warrior transforming into a Parademon. 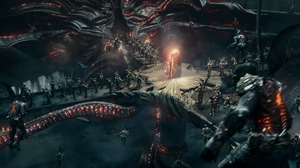 Parademons inside their hive. 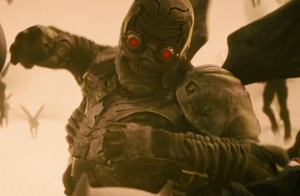 A Parademon from the Knightmare. 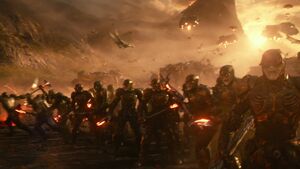 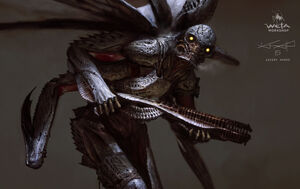 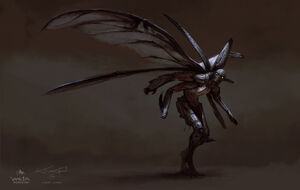 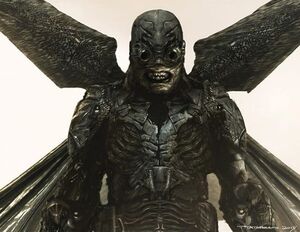 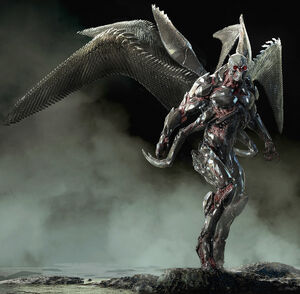 Retrieved from "https://villains.fandom.com/wiki/Parademons_(DC_Extended_Universe)?oldid=3265912"
Community content is available under CC-BY-SA unless otherwise noted.