Create a utopia where work is optional and the unemployed receive full financial support (failed).

The Paradise Group is a terrorist organization from One Punch Man. They are an organization that is made up of young unemployed men who have no motivation to work and seek to create a utopia where work is optional and the unemployed recieve full financial support, regardless if they'll work or not. Lead by Hammerhead, the Paridisers have stolen battle suits from The Organization for them to use.

The group starts causing trouble on F-City, as they seek the building of Zeniru, the richest men in the city, intending on destroying it as to make him an example. After they destroy the wrong building, they go after the correct one while destroying everything in their path. All the members of the group except for Hammerhead were killed by Sonic.

All members of the Paradise Group are young bulky men who are all completely bald. The Paradisers are usually seen wearing black battle suits, which enhance their bodies and give them superhuman strength with the ability to destroy.

Due to their actions and appearances, this causes people to confuse bald people (like Saitama) to confuse them as terrorists and as members of the of the group.

The Paradise Group makes their first appearance as the titular main antagonists of the arc. They first appeared at a public square where Hammerhead is preaching the group's cause to the masses, only to have everyone ignore them going about their normal day. Hammerhead then leads the Paradisers to a several story appartment and destroy it believing it to be a symbol of inequality and belonging to Zeniru. They destroy it, only to realize their mistake and move on to destroy the real building he owns. Zeniru gets a word of it and sends out his bodyguard, Speed-o'-Sound Sonic to kill them. The Paradisers are confronted by Sonic who all attack them, only to have their heads cut off and Hammerhead to run away after his attacks did nothing to Sonic.

Hammerhead is then confronted by Saitama who gets enraged when Saitama is unamused or even reacting to his power suit and even mocks his power suit because it only gives the user superhuman strength. He then tries to beat him, only to have Saitama destroy it and have Hammerhead run off and renounce the group's original cause.

In the aftermath with the group's encounter with Sonic and Saitama, the Paradise Group is left dissolved with all of its members dead and Hammerhead renouncing the group's cause. Later on, a monitor reveals Hammerhead to be wearing a suit and is preparing for a job interview after he promised his mom that he'd get one. 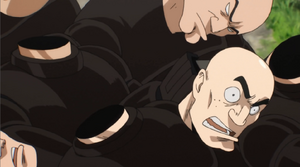 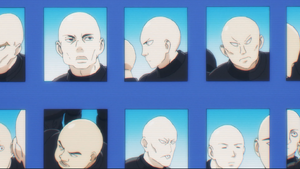 Mugshot of the Paradise Group members.
Add a photo to this gallery

Retrieved from "https://villains.fandom.com/wiki/Paradise_Group?oldid=3891210"
Community content is available under CC-BY-SA unless otherwise noted.