He was portrayed by Shouma Kai.

Parado was the first Bugster to be created, coming into existence after Kuroto Dan sent Emu Hojo a game called Mighty Action C that, unbeknownst to Emu, contained the Bugster virus and infected him with it, manifesting Parado within him.

Under Parado's influence, Emu strayed from his original goal of becoming a doctor and become a gamer. Parado used his skills to help him become known as the Genius Gamer "M" and win various gaming championships.

Emu was later abducted by the Next Genome Institute, who separated Parado from his body, though Parado's Bugster Virus still remained inside Emu and granted him the power to turn into Kamen Rider Ex-Aid.

16 years after the first Zero Day, Parado was informed by Graphite of a second epidemic of the Bugsters virus. Parado received the news with excitement, being eager to expand their game field.

Parado and Graphite collaborated from behind the scenes with Kuroto Dan, the CEO of Genm Corp to create the game Kamen Rider Chronicle as a ploy to give Bugsters control of the human world.

After Genm was defeated by Kamen Rider Lazer's Giri Giri Critical Finish, Parado appeared and creates a protective barrier to allow Dan to escape before pretending to have been the Black Ex-Aid to fool Emu and Hiiro, causing them to lose trust in Kiriya. Returning to Kuroto's office, Parado returned the Gamer Driver and Proto-Mighty Action X Gashat to Kuroto

Some time after this, Parado met with Kuroto and was informed by him that Graphite had taken the Proto Drago Knight Hunter Z so he could give the Kamen Riders their most challenging fight yet as he went on a rampage, causing Parado to jokingly state that Dan had scared him. Parado and Dan later observed from afar as Emu attempted to get his fellow Riders to cooperate in order to achieve a 4 Player co-op. Parado was assured Dan that they would collect their data either way and that they could eventually replace the troublesome doctors with new candidates. Eventually though, Emu and his fellow Doctor Riders were able to collaborate by dividing and using the Hunter Gamer together to terminate Graphite. After Graphite's destruction the Proto Drago Knight Hunter Z was recovered by Parado allowing Dan to use it to complete tests and data recording so they could to move on to the next stage.

Sometime after, Dan presented to Parado a blank, double Gashat he had created for him to use. Parado was informed by Dan that it would need to be inserted into a Bugster to obtain data to finish it and that a human who used it would die instantly from a massive Bugster virus infection. However, the Gashat ended up being taken by Emu who used it and was somehow able to transform the blank Gashat into a new game, Mighty Brothers XX, shocking Genm but interesting Parado.

Parado later received another Gashat Gear Dual from Kuroto Dan, which Parado used to transform into Kamen Rider Para-DX. Eager to demonstrate his new powers, Para-DX fights and easily defeats all three Doctor Riders. Returning to the Bugsters' hideout, Parado is criticized by Dan for not bringing Emu's Gashats with him. Parado simply responded that he was only helping Kuroto so he could play Kamen Rider Chronicle. Dan concedes and agrees to let Parado defeat Ex-Aid his own way. When Kamen Rider Genm made his own move to steal Emu's Gashats, Parado showed up and told Genm not to attack Ex-Aid behind his back before they both left the scene. Parado later transformed into Kamen Rider Para-DX to fight Ex-Aid to take Snipe's Gashats. When the Revol Bugster got in the way of the battle, Kamen Rider Para-DX destroyed the unruly Bugster as punishment for interrupting his "fun", Genm quickly collected Revol's data in the Gashacon Bugvisor, annoyed with Para-DX's decision to destroy the Bugster before leaving with Para-DX. Parado informed Dan of a new Bugster who had come from Ju Ju Burger, a game which Tsukuru Koboshi developed in Dan's absence that was dropped from the Genm Corp.'s line-up. Initiating a Stage Select, Parado and Dan confronted Emu and the Burgermon Bugster. Transforming into Kamen Riders Para-DX and Genm respectively, the two fought Kamen Riders Ex-Aid and Snipe to recover the Ju Ju Burger Gashat from the Riders. After Para-DX defeated both Riders, Dan triggered a Critical Dead to terminate Burgermon and neglected to preserve his data. After the two returned to their hideout, Parado asked Kuroto why he had terminated the Bugster, to which Dan responded that by saying that while Ju Ju Burger belonged to him, the Bugster within was a bootleg and was worthless to him.

Parado would soon begin to grow tired of Kuroto's god complex. When he insisted that he be the one to beat Emu, Dan warned the Bugster not to talk back to the "Game Master" and went on a psychotic rant where he claimed both the Gashats and Bugsters were nothing but tools in his master plan and maniacally proclaimed himself God. After Kamen Rider Genm ambushed and defeated Emu to make him turn over his Gashats, Para-DX intervened and attacked Genm, provoking a fight that ended with Kuroto being brutally defeated. To spite Parado for acting out against him, Dan attempted to rob the former of his wish to fight Emu and revealed to Emu that he was the patient zero of the Bugster virus, causing Emu to stress out and be overwhelmed by the virus.

However, instead of disappearing Emu fainted from the stress. Parado had in fact stepped into Emu's body in order to help him manage his stress and save him. Later, to test how well Kamen Rider Brave could handle the power of a Level 50 Gashat, Parado fights him as Kamen Rider Para-DX Puzzle Gamer Level 50. After Hiiro becomes exhausted from the Level 50 Gashat, Parado decides to leave rather than finish him off, as there would be no honor in finishing off a tired opponent. He returned to his hideout, where he met with Kuroto Dan to ask him when he was to finish Kamen Rider Chronicle. Kuroto instead reveals to Parado the reason that he chose Dangerous Zombie as his Gashat: it's not only Level 10 but also Level X, the undetermined variable.

After Emu defeated Kuroto Dan and deleted the Bugster virus from his bloodstream, revoking his ability to transform into a Kamen Rider, Parado appeared and at first pretended to help Kuroto up, only to turn around and use the Dangerous Zombie Gashat infect him with a lethal dose of the Bugster virus. As Kuroto slowly disintegrated, Parado announced that Kamen Rider Chronicle now belonged to him before leaving.

Parado later revived Graphite, revealing to him that, since he is a Perfect Bugster, he can be revived anytime. He then informed him that they had possession of the final component needed to complete Kamen Rider Chronicle, Poppy Pipopapo, who had been brainwashed by the new CEO of the Genm Corp, Ren Amagasaki. Once all the Bugsters had been assembled, Parado activated the incomplete Kamen Rider Chronicle Gashat, causing all of the Bugsters save for himself and Ren to be absorbed into the title screen.

Poppy was later restored to her normal self by Ex-Aid's programming ability, though Parado continued to assert that Poppy was an ally of the Bugsters and took her back to the Genm Corp. He attempted to engage Emu in a duel, but Emu stayed focus on trying to save Poppy. After Emu managed to save Poppy and clear her game, Parado appeared and possessed Emu.

Parado uses Emu's body to transform into Kamen Rider Para-DX and defeats Kamen Riders Brave and Snipe before heading back to Genm Corp. Leaving Emu's body, Parado takes out a Gamer Driver and attempts to level up, but is unable to as only humans can use the Gamer Driver. Parado then drags Emu outside and reveals to Emu that he was the Bugster born from him. Parado then possesses Emu again to make him transform into Ex-Aid Level XX, with Parado now as Level XX R and Emu as Level XX L. Parado attempts to challenge Emu to a duel, but Emu was not willing to fight. Parado then forces Emu to remember the time when he first learned he had game illness, revealing that he was the one who had kept him alive by taking him over and releasing his stress. Parado then challenged Emu to show he can change his own fate, finally spurring Emu on to fight him. Though Emu appears to be winning at first, Parado turns out to have had Ex-Aid's human DNA imprinted on him, allowing him to transform into Kamen Rider Para-DX Level 99 and turn the tide of the battle in his favor. After overpowering all of the Riders, Parado possesses Emu's body and leaves.

Teaming up with Emu

However, Masamune Dan's return and hijacking of Kamen Rider Chronicle to fulfill his own scheme necessitated Parado teaming up with the heroic Kamen Riders to stop him. After being forced to experience death by Emu, Parado realized the full extent of what his actions had caused and begged Emu for forgiveness. Emu forgave Parado and the two teamed up to stop Masamune.

Parado later sacrificed himself to destroy Gamedeus to prevent him from finishing off the other Riders in an attempt to make up for everything he had done. Gamedeus' death also had the side effect of weakening Kamen Rider Cronus significantly and allowing the Riders to defeat him.

After Kuroto Dan revealed that he had managed to restore Poppy from a data fragment in his left hand, he informed Emu that the fact that he was still able to transform into Ex-Aid likely meant that Parado had reinfected him. Immediately after, Parado emerged from within Emu happy to be alive again. He later bore witness to the reveal of Kuroto Dan's newest game, Kamen Rider Build. 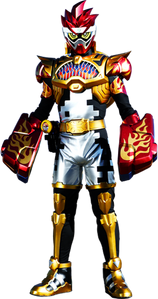 Perfect Knock-Out LV.99
Add a photo to this gallery

Retrieved from "https://villains.fandom.com/wiki/Parado?oldid=3922288"
Community content is available under CC-BY-SA unless otherwise noted.