Villains Wiki
Register
Don't have an account?
Sign In
Advertisement
in: Partners in Crime, Siblings, Fighters,
and 17 more

Para and Dox are the Paradox Brothers. They are twin brothers who work for Pegasus J. Crawford in the Duelist Kingdom arc of Yu-Gi-Oh!. They were also hired by Vellian Crowler to duel and expel both Jaden Yuki and Syrus Truesdale.

The Paradox Brothers are two of Pegasus' eliminators who like to rhyme with each other. Para wears orange and Dox wears green and each brother has a different symbol on his forehead. Dox also speaks in a lower-pitched voice than Para. They duel their opponents in an underground labyrinth in a tag team duel in which if one loses, then they both lose. Their most powerful monster is Gate Guardian, the fusion of Suijin, Kazejin, and Sanga of the Thunder. They dueled Yugi Muto and Joey Wheeler and lost when both their life points went to zero as Gate Guardian was destroyed by Black Skull Dragon, a fusion of Yugi's Summoned Skull and Joey's Red-Eyes Black Dragon.

However, they told Yugi to choose one of two doors. One led to the exit next to Pegasus' castle, and the other led to an endless maze of darkness and despair. Yugi marked two coins with Para and Dox's symbols and told them the coin clenched in his fist is his choice. He revealed Dox's coin, indicating that he chose Dox's door. However, the Paradox Brothers, able to choose which door leads to which path, made it Para's door, but in reality, Yugi expected this - the coin clenched in his fist was for Dox's door, and the one he revealed had Para's symbol on the other side, and so Yugi and the gang escaped the labyrinth.

The Paradox Brothers are never seen following this, except as lost souls in Season 4, Waking the Dragons, alongside the Player Killer of Darkness, Bandit Keith, the Rare Hunter, Pandora the Conjurer, and Yami Marik. As they have never (to the extent of our knowledge) been killed, trapped in the Shadow Realm, or taken by the Orichalcos, it is likely they and the others were just an illusion. Although, it is possible they were sent to the Shadow Realm by Pegasus after they had failed him.

In the Japanese version, the final credits scene shows them dueling Mai Kujaku and Vivian Wong on the Great Wall of China. 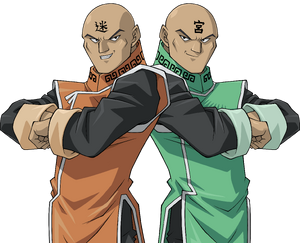