Break out from his slumber (succeeded).

Technically, there are two Roidmude 108s; one is from the present timeline of Kamen Rider Drive who is imprisoned by other fellow Roidmudes because of his behavior, and the other one is from a future timeline. The Future Roidmude 108 is the main villain of the film, who merged with his past counterpart and became the Paradox Roidmude in order to start a new Global Freeze out of time paradox.

He disguised as Eiji after killing him to take his Rider Driver, which he used to transform into Kamen Rider Dark Drive. Under the disguise, 108 made facade that he was going to ask for help from his father, Shinnosuke, while keeping his Dark Drive form separated from him but still activating, as if Dark Drive was chasing after him.

The Future 108 was revived due to the results of Krim's berserk. He escaped and murdered Eiji Tomari, who is Shinnosuke's son and the future's Kamen Rider Drive, to steal his Rider Driver to become Kamen Rider Dark Drive. While pretending to be Eiji, 108 also disguised as Krim Steinbelt to make an announcement, pinning everything on Krim and painted his motivation as impure, before declaring that the era where Roidmudes rules shall come. Then, disguising as Eiji, he lied to his friends and managed to get back to the present timeline, where he could proceed with his plans.

After meeting Shinnosuke while disguising as Eiji, the future 108 began his move, starting by taking his minions, the number-less Future Roidmudes, to the present timeline. By exploiting Mr. Belt/Krim's berserk state, which was formed after Tenjuro Banno and Roidmude 004 rigged his system, 108 successfully framed Shinnosuke and destroyed Krim via his hands.

After faking his death and making Shinnosuke to begrudgingly smash Mr. Belt with Chase's Signal Ax. However, after the death of Krim, "Eiji" revealed his true idenity as Roidmude 108 and Kamen Rider Dark Drive at the same time. 108 fused with his Dark Drive armor once more and attacked Shinnosuke and Chase. Chase managed to cover Shinnosuke to escape, before lending him his Mach Driver.

Shinnosuke later followed the note written by Mr. Belt and arrived in a place with an amazing collection of cars. There, he reunited with Kiriko, who desperately tried to prove his innoncence but to no avail. However, they were attacked by Dark Drive and were forced to escape from Future Roidmudes. Shinnosuke tried to transform using Chaser's Signal Bike, but he can't, forcing him to using the Tridoron Key for transforming in Super Deadheat and fighting the Roidmudes, destroying one of them. Kiriko later persuaded the police to believe in and help Shinnosuke.

Shinnosuke went on chasing the escaped Dark Drive to where the latter's present day counterpart were lie dormant, while the remaining Future Roidmudes were destroyed by Gou, Chase... and later Takeru Tenkuji/Kamen Rider Ghost, who arrived all of a sudden to destroy a Future Roidmude before disappeared suddenly.

Dark Drive arrived in the factory where the present Roidmude 108 lied in dormant, but Shinnosuke appeared to stop him and fought against him in his Kamen Rider Drive transformation. However, without Krim's assistance, Shinnosuke was defeated by the Dark Drive, and the present Roidmude 108 was awakened. Abandoning his Dark Drive Shift Car, the Future 108 introduced himself to his present counterpart, and they quickly work together. The two counterparts of 108s began to fuse together and become Paradox Roidmude, in order to start a new Global Freeze. Shinnosuke was defeated but was saved by Gou.

At that moment, Shinnosuke remembers about the Tridoron Key, which was use to revive him and Mr. Belt to defeat Freeze Roidmude. He recovered the Future Drive Driver, and, alongside the Tridoron Key, he got success in reviving Mr. Belt, who actually had this plan on mind. Later, Shinnosuke proceeded to transforming in Drive to fight with Paradox, but he gets the effect of the Heavy Acceleration.

Thankfully, Kiriko - while possessed by the real Eiji's subconcious - throws him the Dark Drive's Shift Car, saving Shinnosuke. After an encounter with his son's hologram, Shinnosuke proceeds to transformating in Drive Type Special, which combined his Drive armor and his son's Drive form. Using this fusion form, Shinnosuke fought against Paradox and destroyed him with a Rider Kick, ending the threat of Roidmude 108 and the dystopia future he created forever.

With the demise of 108, the dystopian future caused by him no longer existed. It was implied, and finally revealed, that Eiji's mother is Kiriko, whom Shinnosuke married at the finale of the series and gave birth to Eiji later.

Another Drive was sent to terminate Uhr. The Another Rider pursued Uhr and used his Heavy Acceleration to slow Uhr down, but Uhr broke free. Another Drive then jumped in front of Uhr, but Uhr used his time powers to freeze Another Drive, buying him time to escape. However, it wasn't long before Another Drive broke free from the time freeze.

Another Drive eventually tracked down Uhr again, but Uhr by that time had allied with the Kamen Riders. Uhr froze the Another Rider in time, allowing Zi-O and Geiz to defeat it with the combined power of their finishers. After it was defeated, it was revealed to be a copy of Ora, who quickly exited the scene. 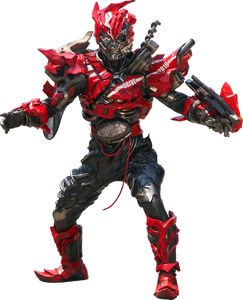