Member of the Frieza Force

Get revenge on King Vegeta and his bloodline. (failed)

He is based off the character of Paragus from the Dragon Ball Z movie Broly - The Legendary Super Saiyan, whom Akira Toriyama decided to induct into Super.

He was voiced by Katsuhisa Hōki in Japanese and Dameon Clarke in English.

Paragus was originally a trusted military lieutenant of King Vegeta. However, after his son Broly was born with a power level of 10,000, greater than King Vegeta's own son Prince Vegeta, King Vegeta, jealous of his strength, sent Broly to a frontier planet in a Saiyan space pod. Furious, Paragus betrayed King Vegeta and went after his son.

Later on, Paragus and an adult Broly were discovered by a squad of Frieza Force soldiers and recruited into the Frieza Force.

Paragus and his son were found by a platoon of Frieza's soldiers, who brought them to Frieza to be recruited. After hearing of King Vegeta's son survival, Paragus decided to go with Frieza to Earth to take revenge via his son Broly. However, he would consistently be shocked at Vegeta and Goku's immense power, startled at Vegeta's Super Saiyan and Super Saiyan God transformations and expressing hopelessness at seeing Super Saiyan Blue Goku matching Broly in his Wrath State. Paragus started to think that King Vegeta might have been right about Broly being a threat to the universe. He was later executed by Frieza via Death Beam in order to trigger Broly's Super Saiyan transformation. Paragus' corpse was then vaporized by Broly's following attack. 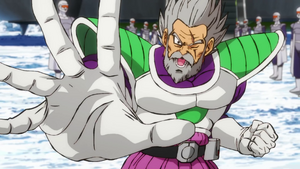 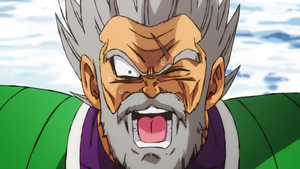 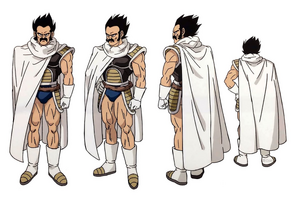 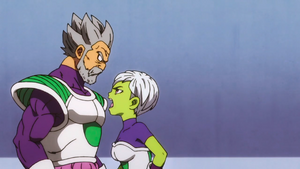