Convert Dreamland into their new home.

The Parallel Bosses are a hostile race from the Kirby series. They are parallel counterparts of Dreamland residents from Another Dimension.

After Team Kirby defeats Taranza (really brainwashed by his black mirror counterpart), he opens a dimensional rift, releasing Parallel Susie and later Parallel Landia into the Dream Kingdom. Fortunately, Team Kirby defeated both adversaries and banished them back through the rifts.

A new parallel villain known as Parallel Nightmare appears, having come from another dimensional rift with the plan to take over all of the Dream Kingdom. When Team Kirby stands in his way, Parallel Nightmare opens more dimensional rifts through the Dream Kingdom. Fortunately, Team Kirby foils his plan and defeats the sorcerer.

In the sub-game "Heroes in Another Dimension", Kirby and allies found their way into Another Dimension to stop Hyness from using the parallel energy to restore the Jamba Heart in his attempt to revive Void Termina. It is up to Kirby to gather the four Heart Spears to shatter the Jamba Heart sealing Hyness away. At the end of four levels, Kirby must fight the parallel forms of Whispy Woods, Kracko, Meta Knight, and King Dedede to obtain the Heart Spears. According to their descriptions, they were created from the energy of the Jamba Heart along with the souls of those who came under the possession of its shards. Fortunately, Kirby defeats the evil doppelgängers.

They are later fought in "The Ultimate Choice" at Soul Melter EX difficulty.

The parallel counterpart of Lord Nightmare and the main antagonist of Super Kirby Clash.

The parallel counterpart of Susie and a major antagonist in the Kirby Clash duology. She resembles the regular Susie, only with paler skin, red hair instead of pink, and her entire suit is black. In Team Kirby Clash Deluxe, Parallel Susie emerges through one of the mysterious dimensional rifts opened after Team Kirby defeats Taranza. Her battle is identical to Susie's battle from Kirby: Planet Robobot. In Super Kirby Clash, Parallel Susie returns in the Decisive Battlefield and fights identically to before. After being defeated by Team Kirby, another dimensional rift opens and sucks her in.

Following her defeat, Parallel Susie comes back as Pres. Parallel Susie, having become the president of a powerful company after wandering through the dimensions. Her appearance here has silver skin, white hair, pink eyes, and both her suit and mech are rose pink. She fights similarly to before, except her mech flies at a faster and more erratic pace. After being defeated, she is once again sucked through a dimensional rift.

After Team Kirby defeats Pres. Parallel Susie and Parallel Susie's Revenge, Parallel Susie in her regular form can be found sitting on top of Magolor's Shoppe and becomes a permanent resident of the Castle Village, appearing to have redeemed herself.

The parallel counterpart of Landia and a boss in both Team Kirby Clash Deluxe and Super Kirby Clash. He is navy blue in contrast to the regular Landia's red, with yellow striped horns, yellow eyes and claws, and wears a black crown with a red gem on it. This version of Landia became corrupted by the power of the Master Crown, similarly to what happens to Magolor in Kirby's Return to Dreamland.

The parallel counterpart of Whispy Woods and the first boss of "Heroes in Another Dimension". He is the manifestation of Whispy Woods' thoughts of his continuous defeats. He is identical to Whispy Woods, only to have a black trunk and leaves, and the holes that make his eyes and mouth are glowing yellow. He battles similar to the regular Whispy Woods and Yggy Woods, although his attacks are slightly faster, and he can inhale at a quicker rate and not get tired. Just like Whispy and Yggy, Parallel Woods takes extra damage from flame-based attacks.

The parallel counterpart of Kracko and the second boss of "Heroes in Another Dimension". He was created by the tears and shattered mists of Kracko's enemies. While having a similar appearance to Kracko, his parallel version has a black cloudy body, red spikes, and a yellow eye with a red iris. Unlike the other Parallel Bosses fought in the sub-game which are simply stronger variants of their past encounters, Parallel Kracko has a new phase where after defeating Parallel Twin Kracko, the two combine together to form the massive Parallel Big Kracko. Parallel Big Kracko uses similar attacks as before such as beams and spewing rain and lightning, but his attacks cover a larger portion of the arena. Like the regular Kracko, his rain attacks can be electrified or frozen over.

The parallel counterpart of Meta Knight and the third boss of "Heroes in Another Dimension". He resembles Meta Knight minus a darker body with a golden mask, boots, shoulder pads, and sword. His eyes are also red. He battles similar to the regular Meta Knight but is quicker and his attacks deal more damage. When he splits into four, the Parallel Meta Knights release large beams from their swords and are capable of creating energy orbs that trap players, damaging them until they break free or someone destroys the orb.

The parallel counterpart of King Dedede and the fourth boss of "Heroes in Another Dimension". He looks identical to Dedede with the exception of color. He has dark gray skin, purple gloves, feet, and beak, a black vest, hat, and hammer, yellow on his vest, and his eyes are black with glowing red pupils. He battles similarly to regular Dedede, except his attacks move at a faster rate and the slams he releases onto the ground produce larger shockwaves. 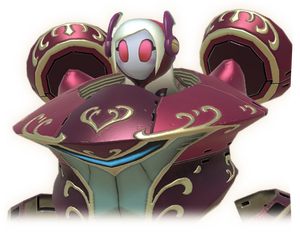 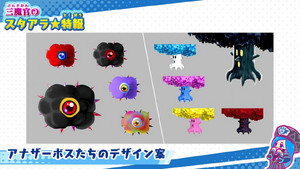 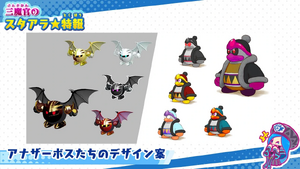 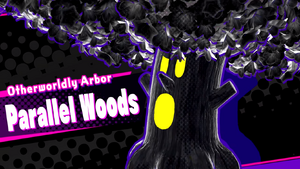 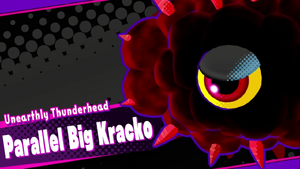 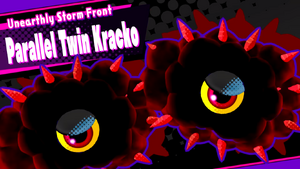 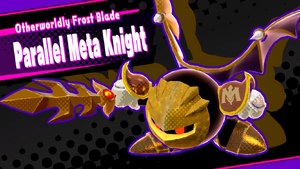 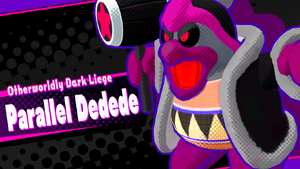