Servant of Salem and Cinder

The Parasite Grimm (unofficial) is a beetle-like Creature of Grimm that possesses the ability to drain targets of their life and power, transferring it to the wearer of the glove that it resides in. Only one of these Grimm has appeared so far and is in service to Salem, aiding Cinder Fall.

The Parasite Grimm appears as a small, six-legged insectoid with a black body and head. It has a white shell (similar to Grimm armor) covered in black markings and stripes. It has two short antennae, and two large pincers around its mouth. It possesses four red eyes; two large ones, and two small ones beneath them.

In the flashback in the episode "Beginning of the End", Cinder, Mercury Black, and Emerald Sustrai ambush and battle the current Fall Maiden Amber. After an intense and prolonged battle between the two forces, Amber is eventually defeated and brought before Cinder.

Cinder uses her glove to summon the Parasite Grimm, which excretes a thick black substance onto Amber's face. It begins painfully draining her of her Maiden powers, transferring them into Cinder. Amber is in significant pain until the connection is severed by Qrow Branwen.

The Parasite Grimm disappears back into the glove, Cinder gains some of the powers, and Qrow escapes with an unconscious Amber. Amber is left in a coma with her face permanently scarred until she is found and murdered by Cinder later.

The Parasite Grimm is shown to be able to drain life and power through the black substance it excretes. This process is shown to be extremely painful and effective, as it left Amber in a coma and permanently scarred. Some of the Fall Maiden's powers were transferred to its host Cinder before the connection was cut, suggesting that, if the Grimm were allowed to work long enough, it would probably completely drain and kill its victims.

The Parasite Grimm also appears to be either living within or summoned by the glove, as a red and black portal is created that allows the Grimm to manifest in the glove's palm. It could also be that the Grimm is somehow a part of the glove, though this is unlikely. 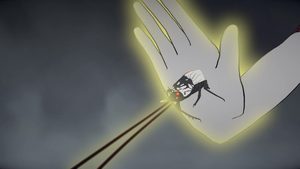 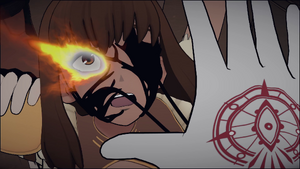 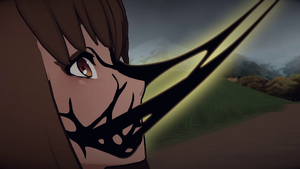 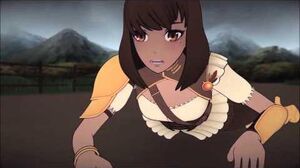 Retrieved from "https://villains.fandom.com/wiki/Parasite_Grimm?oldid=3893054"
Community content is available under CC-BY-SA unless otherwise noted.