Villains Wiki
Register
Don't have an account?
Sign In
Advertisement
in: Animals, Hostile Species, My Little Pony Villains,
and 8 more

Hungry Destroyers
Parasprites are minor antagonists in My Little Pony: Friendship is Magic. They are a race of insect-like creatures that devour anything around them.

Swarm of the Century

In "Swarm of the Century", Fluttershy encounters a Parasprite at the beginning of the episode. Despite witnessing it consume a basket of apples in seconds, she brings the creature into Ponyville. All the ponies except for Pinkie Pie are unfamiliar with the creatures; Pinkie identifies it as a Parasprite and starts seeking out musical instruments. Later, the ponies discover that Parasprites quickly reproduce by coughing up a fuzzy ball that turns into another Parasprite.

While they may look cute, they display a ravenous appetite, eating anything in sight many times their size. When they become a problem, the ponies try to expel the Parasprites back into the Everfree Forest. After several failed attempts, Twilight casts a spell trying to stop the creatures from eating food. However they begin eating wood, fabric, and other materials instead. Desperate to get rid of the Parasprites before Princess Celestia's scheduled visit, Twilight Sparkle goes into the forest to consult Zecora, but she merely states that Ponyville is doomed. Shortly before Celestia's arrival, Pinkie Pie appears with a host of musical instruments. She then marches the Parasprites out into the Everfree Forest, passing by her friends and Celestia, who are amazed by the sight. This method of taming a swarm or pests echoes the folk tale of the Pied Piper of Hamelin. Celestia thought that the Parasprites and Pinkie Pie were holding a parade for her.

Celestia, seeing the Parasprites and the anxious behavior of the ponies, says that she can't hold her visit because an infestation of some sort has plagued Fillydelphia, and she must see to it. The ponies are relieved that Celestia did not see their ruined town, due to the Parasprites.

In "Daring Done", Pinkie Pie briefly mentions an infestation of Parasprites that was eradicated in Fillydelphia while reading the Ponyville Chronicles. 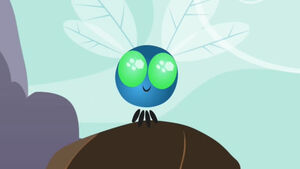 First appearance of a Parasprite. 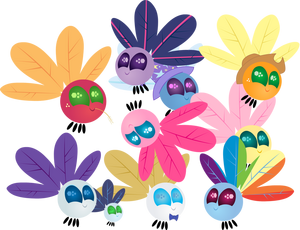