King of all Ghosts
The Ghost King

Tyrannical king of the Ghost World

Ring of Rage
Crown of Fire
Nigh Omnipotence

Conquer the human world and the Ghost Zone.

Pariah Dark is the king of the Ghost Zone and the overarching antagonist of the Nickelodeon TV series Danny Phantom. He only appeared in Danny Phantom: Reign Storm. He is one of the most powerful Danny Phantom villain in the series, though not the most evil.

He was voiced by Brian Cox, who portrayed Hannibal Lecter in Manhunter, Ward Abbott in the Jason Bourne franchise, William Stryker in X2: X-Men United, and Agamemnon in Troy.

Due to his position as ruler of all ghosts, Pariah Dark has a strong, commanding and authoritative force and expects others to listen to his will or be destroyed. He is ruthless, stern, malicious, manipulative and quite arrogant, due to his great power, though he often underestimates his enemies. Pariah Dark seeks only power, greatly enjoying accumulating it, and hates anyone who dares to oppose him.

Long ago, Pariah Dark was the all-powerful king of the Ghost Zone and ruled with an iron fist with the Fright Knight as his chief servant. None dared rise against him due to the seemingly limitless power granted to him by the two items in his possession, the Ring of Rage and the Crown of Fire. However, a group of ancient ghosts joined forces to defeat Pariah Dark and succeeded in sealing away the Fright Knight, before taking the Ring of Rage from him and sealed him away in the Sarcophagus of Forever Sleep. His kingdom was destroyed, with the exception of his castle so as to ensure Pariah Dark remained dormant.

However, Vlad Plasmius inadvertently freed Pariah Dark in an attempt to get his Crown of Fire and the ghost king drove him off. However, he soon learned that the half-ghost had his Ring of Rage and angrily ordered his army of skeletons and the Fright Knight to find it. Vlad gave Valerie Gray the ring to keep safe and soon enough, Pariah Dark's army descended upon Amity Park. Eventually the Fright Knight drove his sword into the ground, claiming the town for the ghost king and surrounding Amity Park in a ghostly shield. Its removal was a "signal of doom", a sign of surrender that would mean the people had given up the town to Pariah Dark. Danny removed the sword, not knowing this, and Amity Park was sent to the Ghost Zone. Eventually the ghost king realized that Valerie had the Ring of Rage and went to claim it, but she bought some time by firing it away on a missile. However, Pariah Dark eventually got his ring back and began planning for further conquest, but Danny, aided by a number of ghosts and his father's experimental ecto-skeleton armored suit, fought his way into the ghost king's castle. Pariah Dark and Danny faced off, but the half-ghost started running out of energy due to the suit's unstable qualities. However, he managed to knock off the ghost king's Crown of Fire and throw Pariah Dark back into the Sarcophagus of Forever Sleep. Vlad succeeded in locking the sarcophagus, imprisoning the ghost king once more.

Pariah Dark is immensely powerful and has all the basic powers of a ghost (intangibility, Invisibility, overshadowing, and flight) but on a higher level than common ghosts, meaning he can fly faster and is stronger and more durable than common ghosts. In order to be at full power, Pariah Dark needs the Ring of Rage and Crown of Fire, which grant him immense, almost limitless power. However, even without their power, the ghost king is quite strong, able to make all the ghosts flee the Ghost Zone out of fear of him and summon an enormous skeleton army. Pariah Dark is able to drain more than half of Danny's energy with one strike when at full power and take energy blasts from Danny and two of his duplicates with mild discomfort, despite his being at 100 times his normal power thanks to the ecto-skeleton suit. Pariah Dark wields a mace in combat, which can return to him when he throws it and can fire a powerful energy blast that broke through Vlad's shield and knocked him unconscious, something Danny could never do. He also seems able to change his size. 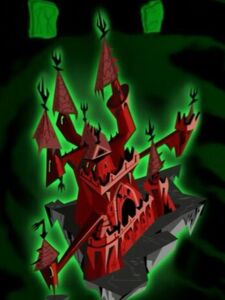 Retrieved from "https://villains.fandom.com/wiki/Pariah_Dark?oldid=3891217"
Community content is available under CC-BY-SA unless otherwise noted.