Make Batgirl fall in love with him (failed).

Paris Franz is the secondary antagonist in the 2016 animated superhero film Batman: The Killing Joke. He is the nephew of Carlos Francesco, the most powerful crime boss in Gotham City. Batman describes him as "a nasty mix of narcissist and sociopath".

Unlike most characters of the film, Paris does not appear in the original graphic novel; he and his uncle are the only characters featured in the film to be an invention of the screenwriters.

He was voiced by Maury Sterling.

Paris Franz is the nephew of Carlos Francesco, a renowned and respected crime boss in the criminal underworld of Gotham City. One night, during a robbery Paris is supervising on his uncle's orders, the thieves are interrupted by Batman and Batgirl. Barbara follows the truck Franz and his right-hand man are fleeing in. While Batman is occupied with other thugs, Barbara tries to stop Paris but is thrown off the truck. Franz however develops an unhealthy obsession with Batgirl.

Back at his uncle's office, Franz is reprimanded for failing to succeed with the robbery as well as for being much too careless. Francesco reveals that Paris' failure cost him $100,000 and he demands that Paris pays him back or he will have him killed. Paris however has other plans. He breaks into a storage room owned by his uncle. There, Batgirl, who has decided to take him on alone, attacks him. Although she manages to defeat his henchmen Franz proves to be a capable combatant and manages to spray knock-out gas into her face. To avoid being captured, Barbara locks herself up in the vault before fainting. Franz uses this opportunity to flee.

For this betrayal, Carlos orders a revenge strike on Paris. While on his yacht, Franz's henchman is shot by a sniper and armed men enter the yacht. Franz and his right-hand escape by diving off the yacht with oxygen tanks. Franz also detonates a bomb on the yacht, killing the attackers.

Franz later contacts Batgirl by leaving a message for her at the police station. The message leads her to the office of Francesco, where she finds the mob boss dead. Franz, having hacked his uncle's accounts, is now his successor and has killed Francesco in an attempt to get her to fall in love with him.

The next night, Franz ambushes Batman at the docks by shooting the Batmobile with a rocket launcher. Although the car crashes, Batman survives and is able to escape the wreckage. He is then attacked by Franz' men and Franz himself. This is witnessed by Barbara who decides to intervene. Barbara drives by him on her bike and attaches a rope around his neck. She drags him behind the bike and crashes him into a pile of wooden crate. Franz gets back up to be viciously beaten up by Barbara. When Barbara blames him for her falling out with Batman, Paris only remarks that it must be 'that time of the month'. That enrages Barbara even more and she continues beating Franz almost to death. However, before delivering the final blow Barbara forces herself to stop, leaving a weakened and beaten Paris for pickup by the Gotham City Police Department. Franz is later taken into custody but is still obsessed with Batgirl, yelling that he loves her. 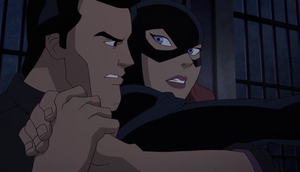 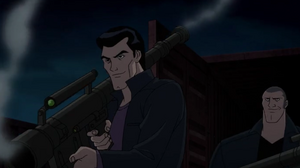 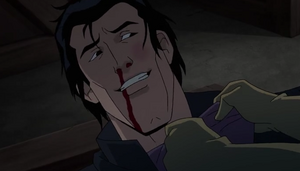 Retrieved from "https://villains.fandom.com/wiki/Paris_Franz?oldid=4194112"
Community content is available under CC-BY-SA unless otherwise noted.