Goad the police into trying to catch him before he kills his next victim (succeeded for a while; eventually failed).

The Party Crasher is the main antagonist of the 1991 action comedy film The Hard Way.

He was portrayed by Stephen Lang, who also portrayed Miles Quaritch in Avatar, Increase Mather in the TV series Salem, Norman Nordstrom in Don't Breathe, Percy "King" Dimplewade in The Nut Job, Khalar Zym in Conan the Barbarian and Shrike in Mortal Engines.

The Party Crasher is an insane serial killer with a habit of phoning the police before he commits a murder, in order to try and tempt them into stopping him. He is first seen contacting the police before entering a nightclub to kill his latest victim, prompting the police to arrive shortly after, including Lieutenant John Moss. The Party Crasher succeeds in carrying out the murder and is able to escape the club amongst the chaos, but Moss manages to grab onto his vehicle as he attempts to drive away. After a lengthy chase, the Party Crasher causes Moss to tumble off the vehicle and taunts him before driving off into the distance, much to Moss' annoyance.

After Moss meets Hollywood actor Nick Lang and is forced to become partners with him in order for Nick to prepare for his upcoming "police officer" role, Moss is taken off the Party Crasher case, which annoys him further. However, unwilling to let the Party Crasher go, Moss continues to investigate him and agrees to participate in a public interview regarding his feelings on the serial killer. Moss intentionally insults the Party Crasher's motives and intelligence on live television, which the Party Crasher sees, in order to get him riled up and reveal himself. The Party Crasher later confronts Moss personally in a parking lot and angrily states that what he's doing isn't wrong, and that he's actually eliminating various people who could have been a problem for the police. He then manages to escape but Moss gives chase once again, culminating in the Party Crasher being shot in the shoulder and taken away in an ambulance.

The Party Crasher, still alive, manages to overpower and kill the ambulance crew before hiding in Nick's car. When Nick gets int

o the vehicle, the Party Crasher holds him at gunpoint and forces him to drive him to safety, but Nick takes the killer by surprise by driving at full speed and crashing the car. The Party Crasher then knocks Nick unconscious and heads to Moss' apartment, where he abducts Moss' date Susan before phoning Moss, daring him to come and save her. Moss and Nick both track the Party Crasher to the top of a tall billboard (advertising Nick's latest film, Smoking Gunn II) and work together to defeat the serial killer. Nick saves Susan from falling to her death while Moss deals with the Party Crasher, but the Party Crasher taunts them both before shooting Nick (although the wound isn't fatal). Infuriated, Moss grabs the Party Crasher and hurls him off the billboard, sending him plummeting to his death onto a glass cabinet a long way below. 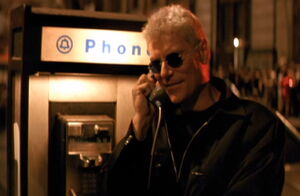 The Party Crasher calling the police to tell them he's about to kill again. 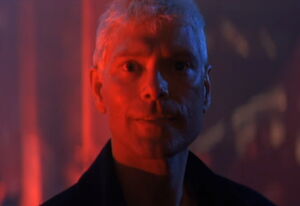 The Party Crasher spots his target. 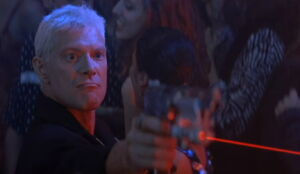 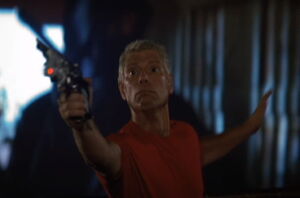 The Party Crasher shooting at Moss in a movie theater. 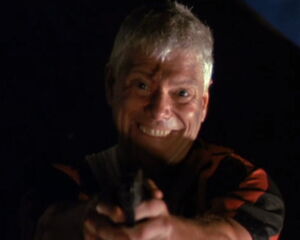 The Party Crasher about to shoot Moss. 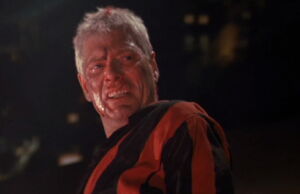 "This isn't the movies, stupid." 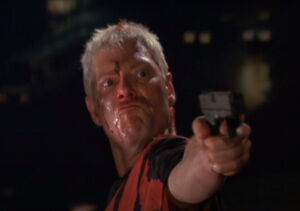 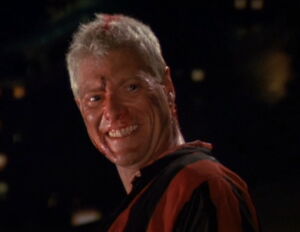