Planning his attempted monarchy in England.

Become the King of England and rule England, Scotland, and Wales.

Pascal Edward Sauvage is the main antagonist of the 2003 movie Johnny English. He is a businessman, entrepreneur, and long-lost French Prince who wants to rule Britain by creating maximum security prisons for all over the country to maintain total control after becoming king.

He was portrayed by John Malkovich, who also played Mitch Leary in In the Line of Fire, Cyrus Grissom in Con Air, Humma Kavula in The Hitchhiker's Guide to the Galaxy, Galbatorix in Eragon, Teddy Deserve in Knockaround Guys, Quentin Turnbull in Jonah Hex, Tom Ripley in Ripley's Game, Vicomte Sébastien de Valmont in Dangerous Liaisons, Teddy KGB in Rounders, and Dave in Penguins of Madagascar.

In 2002, British secret agent Johnny English is sent by his superior Pegasus to go to the Tower of London, to attend a party for the restoration of the Crown Jewels for the Queen. There, English meets Pascal Sauvage for the first time along with Interpol agent Lorna Campbell. While Sauvage delivers a speech, his henchmen turn out the lights and steal the Crown Jewels they hide in the contractor's apartment.

Later, English and his colleague Bough infiltrate Sauvage's office. However, Sauvage is informed of this by one of his henchmen Dieter Klein and reports this to Pegasus, voluntarily causing English to get fired. This allows Sauvage to force Queen Elizabeth to give up the throne, resulting in a ceremony at the church in Britain where he is supposed to be crowned to be king.

However, English, Bough, and Lorna Campbell continued to investigate Sauvage and present themselves at the ceremony to prevent the coronation. Sauvage's security agents finally capture English, but the spy was able to escape from them and infiltrates Sauvage's coronation. English explains to everyone that Sauvage must not by king because he stole the Crown Jewels and would kill anyone who would get in his way. After English realizes that the Archbishop is real, Sauvage orders English to be taken away but English orders Bough to play the disc only for it to show a footage of him lip-syncing to ABBA's "Does Your Mother Know". English sneaks away while everyone is distracted. Sauvage orders the Archbishop to continue his coronation but English snatches the crown while he is swinging on a wire. Infuriated, Sauvage pulls a gun hidden in his shoe and shoots the crown off of Johnny, causing him to drop it. Before Sauvage is crowned the king, English lets go of the wire, pushing Sauvage off of the throne and is crowned king instead, to the surprise of everyone. As king, English orders Sauvage arrested.

Sauvage's final fate is not revealed, but a presenter mentions that if he is found guilty of high treason, he could be executed. Sauvage then makes his final wish that after he is executed his brain will be donated to the British Science Society for schizophrenia research. 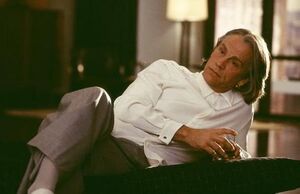 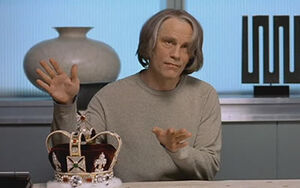 "200 years ago, my family should have inherited the throne of England, but they were cast aside. Well, in a few very short days, it will be back where it belongs... with me." 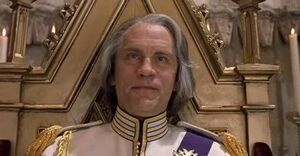 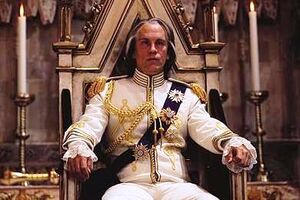