Magistrate of the Corporate Alliance

Control over the Corporate Alliance and all of its assets
Political power and leadership within the Confederacy
Control over various droids, tanks and other weapons
Vast sums of wealth

Leading and managing the Corporate Alliance and its assets.

Producing tanks and weapons for the Separatist Droid Army.
Leading the Confederacy.
Profiting off of the war.

Maintain the Corporate Alliance and its influence over markets and across the galaxy.

Support the Separatist war effort with various tanks, droids, and other weapons.
Overthrow the Galactic Republic and replace it with a more noble government.
Exploit the war and other worlds to make a profit off of the conflict

Passel Argente was a male Koorivar from the planet of Kooriva. He was the Magistrate of the Corporate Alliance and was previously a member of the Galactic Senate representing his homeworld during the last days of the Republic. Following the outbreak of the Separatist Crisis, Argente had pledged his allegience to the Confederacy of Independent Systems and joined it along with the Corporate Alliance as well.

Uproar in the Senate

Passel Argente was born on Kooriva in the Inner Rim and entered into both politics and the corporate world at an early age. He quickly became the head of Lethe Merchandising, a company affiliated with the Corporate Alliance, and was elected to be the represenatative of Kooriva in the Galactic Senate. As a senator, he amassed great wealth but was accused of corruption and eventually rose to become the Magistrate of the Corporate Alliance. Argente was a vocal critic of Suprme Chancellor Finis Valorum often ciitng his weak stances of the protection of commerce hyperlanes in the Outer Rim Territories and he planned to supplant the chancellor with other senators that he was affiliated with. In 32 BBY Argente was invited by Ryloth Senator Orn Free Taa's box at the Coruscant Opera and joined his collegues where they discussed Valorum's ineffectiveness.

During the Trade Federation blockade around Naboo, Passel Argente had supported the exiled Queen Padmé Amidala and backed her Vote of No Confidence against Valorum which forced him to step down and allow Palpatine to ascend and become the new supreme chancellor. He continued his career in the senate afterwards while also leading the Corporate Alliance as well.

In 27 BBY, Argente was accompanied by Jerv Riske, a human bodyguard who traveled around with the Magistrate and was the head of security for Argente. He traveled with Argente to the planet of Barlok to negotiate a trade dispute between the Corporate Alliance and Guildmaster Gilfrome over a mining dispute. He stayed at the Starbright hotel during the negotiations when an unknown assassin attacked him and tried to kill him but was saved by Jedi Master Jorus C'baoth.

Mission in the Fakir System

In 24 BBY, the galaxy was thrown into turmoil following the outbreak of the Separatist Crisis in which thousands of planets and star systems, many who were loyal to the Republic for centuries, began to abandon and campaign to secede from the Republic of which they viewed as bein corrupt and ineffective. Passel Argente was still a senator at the time but, he did order an attack on Yirt-4138-Grek-12 in the Fakir System to destroy an industrial espionage facility on the astroid. His allegiences were questionable during the time but, he did make a large donation to the Refugee Relief Movement on behalf of the Corporate Alliance.

In 22 BBY, the Separatist movement began to pick up steam as more and more worlds wanted to secede and the Confederacy of Independent Systems was leading the way. On the eve of war, Passel Argente was invited and traveled to the Outer Rim world of Geonosis with his aide Denaria Kee where he met and conviened with Sith Lord and Separatist Leader Count Dooku and the other Separatist leaders, consisting of Trade Federation Viceroy Nute Gunray, Geonosian Archduke Poggle the Lesser, Techno Union Foreman Wat Tambor, InterGalactic Banking Clan Chairman San Hill, Commerce Guild President Shu Mai, Hyper-Communications Cartel Chairman Po Nudo, and Quarren Isolation League Head of State Tikkes. There, he signed Dooku's treaty along with the other attendees and pledged the support and allegience of the Corporate Alliance to the Confederacy along with the other companies as well.

Passel would remain on Geonosis as Jedi Knights Anakin Skywalker and Obi-Wan Kenobi as well as Naboo Senator Padmé Amidala were all captured and were set to be executed in the arena but were saved by a group of 212 Jedi. 179 of the Jedi were killed but, the survivng Jedi were saved when the Grand Army of the Republic emerged and saved them while also invading the planet of Geonosis. Following the beginning of the battle, Argente fled to a war room with Gunray, Dooku, and Poggle as they oversaw the battle but eventually had to retreat and fled Geonosis to avoid capture. The Clone Wars soon began and Argente was put as one of the members of the Separatist Council and helped spread anti-Jedi and anti-Republic propaganda in Confederate territory to keep its people pro-war.

At the start of the Clone Wars, Argente was briefly involved in a plot where he wanted to oust Count Dooku as the Confederacy's head of state and planned on doing so by launching an attack on the key-Republic world of Kamino with the Separatist forces being lead by his puppet, Mon Calamari Commander Merai. His plan was to destroy the cloning facilities on Kamino in hopes of ending the war immediately and hoped to gain enough public support to oust Dooku and become the new head of state. Dooku however, found out about the plan and leaked the details to the Republic and during the First Battle of Kamino, Argente failed and the Separatists were forced to retreat as punishment for the Koorivar's attempted betrayal.

Following his failed coup attempt against Dooku, Argente soon heard the news that the Skakoan Techno Union Foreman Wat Tambor had been secretly planning and moving against him. Fearing that he could be potentially assassinated, Argente had contacted and made a deal with the Trandoshan scavanger Gha Nachkt to purchase a droid that would act as his own personal spy.  An RA-7 Protocal Droid was given to him however, Nacht was secretly already bought out by Tambor and his droid acted a spy for the Skakoan against the Margistrate and reported on all of his actions across the galaxy. The most prominent example was when Argente had gotten an interest in the Twi'lek world of Ryloth which motivated Tambor to invade and occupy the planet.

Later in the war around 21 BBY, Argente was involved in a plot where he had been planning on invading and conquering the agriworld of Ukio and assembled a Separatist military force in order to conquer the planet. Despite the presence of the Republic over the planet, he went forward with his plan and remained intended on striking a decisive blow against the Republic on the planet. He commissioned a T-Series Tactical Droid named Doctor to assist him in instigating Project Instinction. When in orbit of the planet, the Separatist forces would release large amounts of soil from the moon of Moorja and release it around the planet to block out its sun.

By doing so, it would decimate the Ukians agriculture and force them to capitulate and they lowered their defenses so the soil would disperse and the Confederate fleet took advantage of the time and dropped strange weapons on the planet's surface. The weapons were activated and the decives let out a strange signal that caused all non-force sensetives to go insane and turn into bloodthirsty and act visious. Jedi Knights on the planet eventually destroyed the devices and fought back Argente's attack however, the planet's food supply was decimated and the Republic ultimately was forced to withdraw and Ukio fell to Argente in the end and robbed the Republic of a major supplier.

End of the War

As the war dragged on and entered into its final stages, Argente's homeworld of Kooriva fell to the Republic and many Separatist planets, strongholds, and purseworlds were eventually invaded and layed siege to by the Republic forces. Argente was driven from his homeworld like many of the other Separatist leaders and he eventually traveled with Supreme Commander General Grievous for protection on board his flagship, the Invisible Hand. During the last stages of the war, the Separatist forces invaded the sinkhole world of Utapau and conquered it with ease and quickly subjugated its people. After the planet was conquered, Passel Argente set up shop on Utapau along with the other Separatist leaders and the planet was made into the new headquarters of the Separatist Council. During the Separatist invasion of Coruscant, Argente oversaw the battle on Utapau with the othe council members, briefly celebrated when victory seemed as if it were around the cornor, and was shocked when Dooku was killed and the Separatist forces retreated.

In 19 BBY towards the end of the Clone Wars, Argente remained on Utapau under the protection of General Grievous. After Dooku was killed, Grievous assumed the title as the new Confederate head of state and had all of the Separatist Council gather for a meeting where he had then sent deep into the Outer Rim to the fiery world of Mustafar to escape the clutches of the Republic knowing that they'd eventually find them on Utapau. Argente fled with the other Separatist leaders and they all traveled to Mustafar and eventually arrived at the Klegger Corp Mining Facility and stationed themselves in the facility's war room where they oversaw the last battles of the war.

After Argente and the Separatist Council fled Utapau and escaped to Mustafar, they remained in the mining facility and oversaw the last campaigns of the Clone Wars. After Grievous was reported dead on Utapau during the Republic invasion of the planet, the Separatist Council took over and became the new leaders of the Confederacy with the council leader, Nute Gunray, now becoming the new head of state. Argente was present for a meeting where Darth Sidious had contacted the Separatist leaders and promised to reward them for their loyalty to his cause and would send his new apprentice, Darth Vader, to come and "take care" of them. Eventually after destroying the Jedi Order in Order 66, Vader arrived on Mustafar and entered into the facility and greeted the Separatist leaders. They first greated him with pleasent remarks but, they soon found themselves locked in the room and were eventually cut down one by one with Argente being one of the victims.

After Passel Argente was killed on Mustafar, his company of the Corporate Alliance had dissolved without its Magistrate and all of its resources and assets were annexed into the newly formed Galactic Empire which emerged after the Republic was dissolved during the Declaration of a New Order and the shut down command was activated after Vader killed the entire Separatist leadership and dissolved the Confederacy. Due to his involvement and support of the Clone Wars, Argente eventually lead to the downfall and end of the Republic with the rise and return of the Sith. 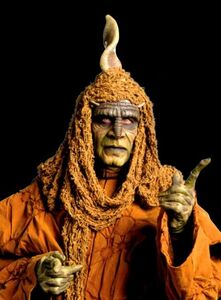 Retrieved from "https://villains.fandom.com/wiki/Passel_Argente?oldid=3636076"
Community content is available under CC-BY-SA unless otherwise noted.